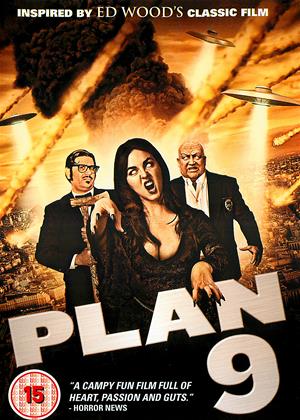 Plan 9 is set in Nilbog, a town invaded by aliens. It begins with Mister Lobo playing Criswell, the kiss-curled real-life American psychic (1907-1982), whose mental powers are completely ignored here. Equally, the actor couldn’t look less like Crisswell. What we get is the kind of OTT performance that lets you know exactly the style the makers of this remake of ‘Plan 9 From Outer Space (1959)’ (often labelled the worst film ever made) are embracing. There are some pleasing nods to the original of course. The bereaved gentleman played by Bela Lugosi hangs himself whilst wearing a Halloween Dracula cape, Lucy (Sarah Eshleman) playfully dangles a lightshade over a miniature town model, echoing the hub-cap spaceships in Ed Wood’s project.

For me, ‘Plan 9’ is guilty of the same thing as the film that inspired it: it is a little boring. Not so bad it is good, not so bad it is bad, it just continues long past the point the audience cares. A cheap, campy film with often (deliberately?) cardboard performances and lacklustre monsters, encompassed in a pulpy sci-fi concept, is only entertaining for a limited time before the audience want something more ‘solid’ to invest in. Taken as it is, it might well be best watched with friends, over pizza and other occasional distractions.