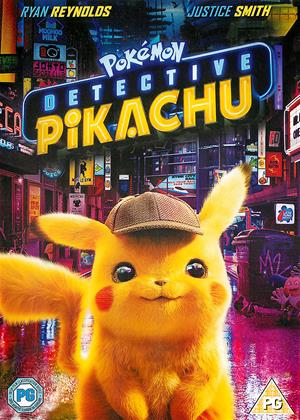 This is very loosely based on the Detective Pokémon game. Overall in a way its like a kids deadpool - the story is ok but the CG is really impressive.

There's plenty of pokemon in this film adaptation and is very funny. I don't think its too hard to work out what's going on but the acting is good. I think the only real let down is the lack of pokemon battles, we have catching them but only one battle which Is over very quickly.

Definitely worth a watch though as it looks amazing. The level of technical work is really impressive both with cinematography and CG.

My son loved identifying familiar pokemon throughout the movie. CGI work is good, plot a bit weak but as long as you're aware that this is never going to win Oscars, you seditious enjoy!

Me and my son really enjoyed this film, it was great seeing all the different Pokemon characters there, storyline was interesting with a twist at the end I hope they do a sequel!

Detective Pikachu is a live-action Pokemon movie where...do I even need to continue? One look at the doe-eyed fuzzy title Pokemon in a detective cap and voiced by Ryan Reynolds and that’s apparently all you need. Just a few glimpses at the trailer generated plenty of buzz but what I found strangely absent from the many clips was a lack of interest in the detective story. As it turns out, even Detective Pikachu loses interest in its neo-noir setting and decides to settle back into the familiar odor of end-of-the-world weirdness the animated Pokemon movies did so well/poorly.

The staging is at least admirable. The film saddles us in Ryme City, a utopia where humans and Pokemon can live in harmony without battles. Squirtles can put out fires and Machamps can direct traffic. There’s some neat stuff going on in every nook and cranny of this city. It’s just too bad that Tim (Justice Smith) can’t enjoy it as much as he’s currently grieving over the loss of his father in a car crash. We learn of a somber relationship he had with his dad, rejecting offers to come to Ryme City as a kid after the death of his mother. All grown up and unsure of where to go with his life, Tim tries to find some closure at his dad’s apartment.

What he finds is a little more than he bargained for. A snooping reporter asks him questions. A strange vial of purple gas is discovered on dad’s desk. Pokemon seem to try to attack him for some odd reason. Most peculiar, however, is the presence of a Pikachu in a detective hat with amnesia and speaks in the voice of Ryan Reynolds that only Tim can discover. What does it all mean? A mystery, of course.

Or at least that’s what I thought this all meant. For the first act of the film, there’s a definite neo-noir detective vibe, where Pikachu and Tim team up to prowl that dark corners of Ryme to find out what really happened to Tim’s father. They question quirky Pokemon and take a trip down to the shady spots of the city where underground Pokemon battles are held, against the law in Ryme. Not too shabby for a property all about cute monsters. There’s even some simply sweet and somber moments where the film can breathe past its manic exposition.

But then something seems off in the second act. Now we’re venturing further down a conspiracy of mad scientists and experimental Pokemon. The shade of night is replaced with bright and blinding wilderness, where our heroes will do less detecting and more running from evil Pokemon and scaling cliffs. In addition to the big twist of the third act donning on me early, so too did the format of previous Pokemon movies that relied on goofy logic and cartoonish villain schemes. By the end of the film, any semblance of a detective movie has been shed in favor of a more traditional Pokemon movie that is more akin to a blockbuster, boasting bigger VFX, explosions, dangling from skyscrapers, and bitter villains that’ll take the time to reveal their master plans when they know they’ve won.

Bits and pieces of Detective Pikachu work. Watching Pikachu and Tim try to play good cop/bad cop makes for great comedy and there’s a refreshing atmospheric scene where our heroes are led through the jungle with all manner of Pokemon populating the area. But it’s also a frustrating film not merely for the depressing shift in genre but how little we get of that Reynolds charm and sass. I wasn’t expecting him to bring that hard-R Deadpool banter but I did hope he would provide some much-needed commentary on the villain’s overly elaborate and silly plans. For the most part, he seems to back off and lets the adorable nature of Pikachu be Pikachu and Reynolds simply play Reynolds. On the basis of a typical Pokemon adventure movie with Reynolds bringing his standard wit, Detective Pikachu works in a handful of sequences. It’s a downer that the film abandons, you know, the whole detective angle.