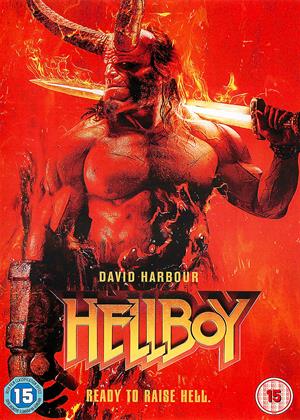 Nowhere close to the originals, but ok for a Saturday night in! - Hellboy review by CS

After reading other reviews I didn't have high hopes for this film, and upon watching it I wasn't disappointed! The big mistake they have made with this film is to try and bring  an X-Men feel to it all and it simply doesn't work! The make up and special effects are very poor and stuck in the 1980's, how they have redesigned Hellboy himself is very poor and as soon as you see him, you just think, err no, that doesn't work or look right at all! Perhaps part of the issue is that the original two films by Del Torro, were so well thought out and executed, that it was just too difficult to match them anyway! But for me I get like I was watching an old 80's B Movie, with a low budget and a very Doctor Who feel to it all, I also thought it reminded me of many Stephen King films, because the witch in it really is right out of something else. I can't quite put my finger on it, but it was like a mash up of loads of other films, that in themselves were mash up's, like Vin Diesels 'The Last Witch Hunter' or ' Warlock' and so on! In all it just had a very dated and unoriginal feel to it and the acting was pretty poor too, as was the script, storyline and direction. An ok film, but it did drag on a bit and had nowhere near the kind of love and attention of the originals!

You should know what to expect, and it is all in this film.

Obviously nothing on the originals - Hellboy review by JD

I like this sort of film, so just about managed to remain neutral to it. There are lots of great monsters which is the films biggest win.

But the plot was a bit tedious and the digs at the english and 'old boys' clubs is a bit lame. There is a clear impression of disliking the english.

The special effects were up and down, at times it was impressive - then the CGI would fail miserably.

One great thing about the film tho is it makes you appreciate del torro and Perlman.

Few good laughs, otherwise dire. I have no idea why they made it. It is nowhere near original films, in fact an insult to them because I decided to watch this because of my enjoyment of first two.

Not a good film - Hellboy review by MH

I loved the previous Hell boys I never judge a reboot until I've seen it but with this one didn't like it. first of all to much swearing and I swear like a sailor. swearing in films doesn't bother me if it's in the right context. Then the make up was very poor if the film had been made in the 80's brilliant. last of all story very poor.

There’s a bitterness that comes with a reboot such as Hellboy. Gone is Guillermo del Toro’s fantastic direction, replaced by the messier direction of Neil Marshall. Gone is Ron Perlman in the role of Hellboy, replaced by the less buff and swagger-deficient David Harbour. That may seem unfair to compare and look down on the new Hellboy but it’s hard to shake the del Toro trilogy that will never be completed when the Perlman era Hellboy is restructured as the polar opposite of the mystique and brilliance in del Toro’s movies. But even if hampering those thoughts, the film is still a massive mess of misfires.

If you’re worried that the Hellboy would reboot would be a not-so-impressive rehash of origins, you’d be wrong; it’s far worse. Not only are we treated to the backstory of Hellboy once more, the demon extracted from hell by Nazis that was taken in by the BPRD to combat demonic forces, but the backstories of every single character. You’ll get to learn all about Hellboy’s adoptive father Trevor Bruttenholm (Ian McShane) and his role in Hellboy’s upbringing. You’ll hear all about the paranormal powers of Alice (Sasha Lane), a girl Hellboy has known since she was a baby. You’ll be treated to a forced tale of soldier Ben Daimio (Daniel Dae Kim) having a conflicting nature about monsters in addition to being one himself.

Oh, and we haven’t even gotten to the Blood Queen, Nimue (Milla Jovovich), back from the dead to take revenge after being slain by King Arthur. To be fair, her backstory is the most entertaining, opening the film with a mix of grayscale and red with McShane telling her story with grit. It’s a great mood-setter, albeit for a film that’ll let you down fast. Nimue’s rise from the underworld has her hiring a revenge-seeking warthog creature and they have some decent chemistry but there’s no time for that! The urban fantasy must make several stops of giant slaying, vampire wrestling, battling witches, and paying Merlin’s coffin a visit.

Hellboy is rather astounding as a bad movie that spells everything out and never lets anything feel organic. This is the biggest problem in that Hellboy has to feel conflicted about who to side with when Nimue promises Hellboy a more accepting world when it all comes to an end. But where is this hatred for humanity spawned from? Though he is targeted by some monster hunters, he seems accepted enough at a wrestling ring or a bar where he can just stroll on in and have a drink. Where does this hatred spawn from? No time; gotta tell instead of show because there’s no room for getting to know these characters. Not when there’s a tidal wave of characters who will either spout exposition or do nothing.

It’s a shame to admit that Hellboy suffers from this overstuffing that has become a common issue with modern comic book movies desiring more. Also feeling cramped are the special effects which are presented in great abundance and without much spectacle. There’s a very jarring scene where Hellboy is smacked around by giants wielding massive swords and the compositing is so terrible I don’t understand why the film didn’t just shirk the live-action element and become 100% animated. A film that features ghost-punching, ghost-vomiting, contorting witches, moving houses, and city-sized monsters could benefit from such a format.

I don’t want to compare but, really, we could have had a Hellboy 3. We could have had the story finish out a trilogy where Hellboy had to deal with that cliffhanger of his best girl being pregnant with twins. Instead, we've been presented an overstuffed, watered-down, exposition-riddled trainwreck that is a dud in every aspect, from the forced humor to the goofy special effects and backstory-leaden script.