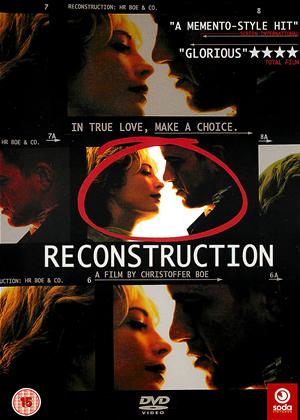 Synopsis:
Christoffer Boe's stunning debut turns romantic drama inside out. Beautifully shot on the streets of Copenhagen the film explores how life's daily decisions can take you in different directions, and when you follow one path there is inevitably another path that disappears. Alex (Nikolaj Lie Kaas) has a settled life with girlfriend Simone (Maria Bonnevie), but when by chance he meets the beautiful Aimee, an intense affair develops. Just as they plan to leave town together, everything in Alex's life begins to start, literally, falling apart.
Their chance meeting results in a rollercoaster ride that neither of them could have anticipated - including inexplicable changes in their identities and relationships with those closest to them. Reconstruction is multi-layered and will keep you guessing about where the storyline is going until the very end. Remember, though, that this is a film - it is a construction.
Actors:
Nikolaj Lie Kaas, Maria Bonnevie, Krister Henriksson, Klaus Mulbjerg, Nicolas Bro, Peter Steen, Ida Dwinger, Malene Schwartz, Helle Fagralid, Mercedes Claro Schelin, Jens Blegaa, Isabella Miehe-Renard, Katrin Muth, David Dencik
Directors:
Christoffer Boe
Writers:
Mogens Rukov, Christoffer Boe
Others:
Christoffer Boe
Studio:
Soda Pictures
Genres:
Drama
Countries:
Denmark, Drama
Awards:

"Remember, though, that this is a film - it is a construction". Well duh! This clunky superfluous reminder suits the film perfectly. Sometimes these clever reality warp films work, and sometimes (as here) they don't. Why? Firstly, the intense love needs to be better realised (e.g. Eternal Sunshine of the Spotless Mind). Here the main character is unsympathetically self-absorbed and treats his girlfriend like a doormat; worse, his encounters with the mystery femme fatale have the profundity of a lager ad.

Secondly, the reality warp needs to create tension and direction (e.g. Memento, with which this film claims to be compared). In Reconstruction the love object's partner is a novelist who is writing, and thus er "Constructing" (ding! ding!) the events of the film. Unfortunately this undermines the reality of the characters. A film can warp reality as much as it likes provided we can still believe in the characters, and care for their predicaments.

The acting is first class and many familiar faces (Krister Henriksson: Wallander)and others from The Killing remind this viewer how badly it compares with the brilliant stuff currently gushing out of Sweden, Norway and Denmark.