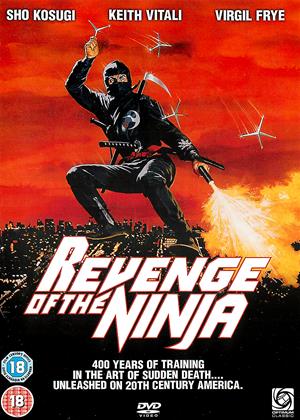 Reviews (1) of Revenge of the Ninja

Although it's difficult to believe in an era where ninjas are up there with pirates and zombies as all-pervasive pop culture clichés, we didn't know what they were until Cannon Studios released "Enter The Ninja" way back in 1981. That cheap and cheerfully gory little B-picture was a big hit, so naturally they made a follow-up, and here it is.

To the movie's credit, certain problems with "Enter The Ninja" have been addressed. In those years of dawning political correctness, it presumably occurred to them that making the evil ninja Japanese and the hero the sole Caucasian ninja in the entire world was maybe a wee bit racist. More prosaically, it definitely occurred to them that casting a past-it sixties action star as a super-athletic martial artist, meaning that the hero has to be filmed from unusual angles or wear some kind of headgear every single time he does anything spectacular to hide the fact that it's not really him doing it, was just plain daft. Therefore in this non-sequel, Franco Nero's slightly flabby middle-aged white ninja is nowhere to be seen, and the considerably more appropriate Shô Kosugi, the villain in the previous movie, plays the good guy this time round (though not the same character, who by the end of "Enter The Ninja" no longer had a head), and it's a white guy playing the baddie who can only make impressive moves when his face is totally hidden.

Not that this is a good film. The acting ranges from rudimentary to appalling. Kosugi's quite good at what acting he's called upon to do, most of which boils down to scowling while hitting people, but the villain is so bad he's sometimes funny. He actually does the "Mwaaahahaha!!" laugh while attempting to torture a scantily-clad woman to death with a jacuzzi - how eighties is that? And the less said about the supporting cast the better. However, you judge films for what they are, and this one never tries to be anything other than what it says on the tin. There's a ninja. He gets revenge. What more do you want?

It has to be said that some of the fighting is a bit tedious, especially the contests that don't involve either Kosugi or his adversary's masked stand-in, but as the violence escalates, it becomes downright Pythonesque. Who knew that ninjas distract their enemies by producing life-size replicas of themselves out of nowhere? And I'm pretty sure that Kosugi's foes in one battle were deliberately intended to come across as an evil version of the Village People. But hey, if you want to see a movie in which an invincible Asian in black pyjamas defeats a horde of baddies, many of them in fancy dress, with weapons even Batman would think were absurdly contrived, you could do a lot worse than this.