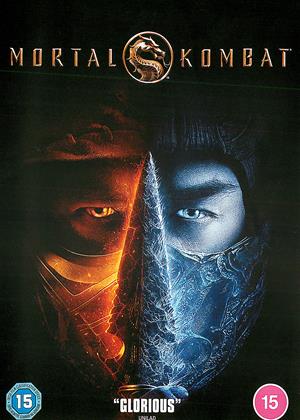 Video games used to have FMV (full-motion video) sequences. They were live-action filmed cinematic sequences you could watch in between gameplay. These videos were often awkwardly staged and featured incredibly cheesy acting. Gamers didn’t mind them much. After all, they were mostly just displays of exposition meant to push the game’s narrative forward. Most importantly, you could generally skip these scenes to get to the action. The Mortal Kombat movie, however, has no such feature.

I know that’s probably an old joke to make at this point when it comes to video game movies but it holds true for the latest Mortal Kombat movie. Here you have a series of action sequences that are rather engaging in their creativeness and dead-on-arrival moments of exposition. Yet with all the time the movie has to tell its story, it meanders with so much vagueness and sloppy editing that the set up of the Earth realm fighting against the Outworld realm is said more through text and bland deliveries than it ever appears.

We’re introduced to characters in very awkward ways where we never know the true lengths of their motivations. For example, we watch as Sub-Zero and Scorpion battle each other over a certain dominance of houses but we’re never let in on how this feud started or what is at stake for their bloodlines. Also, Sub-Zero is a Chinese warrior while Scorpion is a Japanese swordsman, both having believable names. They will drop these names once they don their video game costumes for reasons that are never once divulged. The fans will reason this needs to happen because those are the names they have in the game. But why then must they literally state these silly names by muttering the lines “I am now Sub-Zero” with complete seriousness?

Mortal Kombat takes itself so damn seriously that it never comes off as fun the times it chooses to make references to the games. This is also because the references keep flying at the screen that’ll make fans jump and cheer that the movie said a reference that they got. Everyone else, however, will be scratching their heads about the mechanics of Outworld, the fighting tournament it holds for dominance, and why random characters come out of the woodwork.

Now fans would argue that the film is then more for them and general audiences who don’t get this stuff should do their homework. But I grew up with Mortal Kombat. I know about Outworld and I recognized when characters like Kung Lao and Goro popped up on the screen, despite having no introduction. And I found myself baffled, asking “Why is the movie now showing this character?” The subplots of the lackluster personalities of all the characters involve just continues to mount higher and higher, adding too many characters you don’t get to know or care about. There’s just too much crammed into under two hours that the film’s tournament, the most important event that the warriors of this picture speak about, doesn’t even happen. Yes, you’re watching a prologue.

Are the fights good and gory? Sure, they’re well-staged and exceptionally violent with blood and guts. Maybe not as much as some were hoping for, however, considering how few heroes bite the dust. The fatalities are at least varied ranging from hearts being pulled out to heads being smashed to being consumed in flame. The fight between Sub-Zero and Scorpion at the height of their powers is quite the scene as well.

You’ll notice, however, I’m not talking much about the characters and that’s because there’s not much too them. Cole Young is a failed MMA fighter who loves his family and is willing to fight for them. Sonya Blade is a special forces soldier who is dedicated to tracking the players of Mortal Kombat but also wants to compete for some reason. Kano is a mercenary for hire with a cocky attitude of insults slurred through beer chugging. Liu Kang is a standard all-knowing warrior who never becomes interesting until the death of his cousin stirs pathos. Jax is a soldier who gets robot arms and...that’s about it. Raiden is the scowling teacher and Shang Tsung is the calm and collected villain. They have almost no personality considering their dialogue is as flat as their deliveries, where even the expletives feels like a whole lot of nothing.

Yes, Mortal Kombat has more violence than the 1995 film which I’m sure is the only thing some fans will care about. But it comes at great sacrifice of character, charm, and any coherence. Okay, that last aspect may not be a deal-breaker and I’m sure the automatic defense of this film will be it’s a turn-your-brain-off movie. I would like to know to what lengths I would need to shut off my brain to ignore the lack of personality. As it stands, Mortal Kombat is a series of frenetic fights that are sadly housed within a stupid script that forgets to make a film about a fighting tournament actually have a tournament.