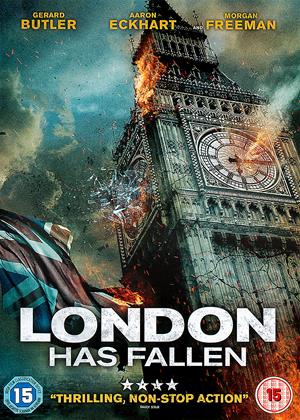 Reviews (7) of London Has Fallen

Loved it great actors great story, plot... Adventure & action all I like in a movie.

I just wish to leave a brief note on what I like about movies I am watching not to have to leave always over 100 characters?

Gerard Butler’s ‘Fallen’ series shows the Bourne and Bond franchises how to do it. No messing around with subplots or filler chat. Just pitch your hero against overwhelming odds and let him get on with it.

Like a breath of fresh air, ‘London’ deliberately sets out to combat the Greengrass shakycam school of filming by using smooth, considerate camera shots that have real pizazz. Sweeping crane and aerial shots capture the spectacle brilliantly. Kudos to director Babak Najafi on his first actioner. The hilarious dialogue makes Bond sound doubly cheesy. Sample. On-the-run American president to Gerard: ‘What happens if you don’t come back?’ Gerard: ‘You’re fucked.’

It’s hard to believe, as yet another London landmark bites the dust, that it was filmed on a Bulgarian backlot, where they even built another Piccadilly Circus. There’s an exciting car chase, an exciting helicopters v missiles aerial battle and much more. The initial assault on the baddies’ stronghold is filmed as a 2½ minute single travelling shot that would not look of place in Cuaron’s Children of Men. Brilliant stuff.

Torture is ALWAYS wrong Unfortunately I seem unable to remove this one star given in error. - London Has Fallen review by GP

My wife & I stopped watching this film after 30 min as it seemed to glorify the "Goodies" torturing the " baddies". I would advise anyone with a conscience to awoid this film

Worst film ever - London Has Fallen review by LH

This is the worst film I have ever ever seen (and I have seen Vertical Limit, Signs and Van Helsing - and also Birdemic, but I sort of recommend that because it is so awful it is funny). There are more guns at Westminster Abbey at the start of the film than there are in the entire of the UK and after that it is mostly explosions and grunting. You can spot the bad guys by the colour of their skin - but it's OK: they all get blown up at the end, along with anyone else near by. (Lucky Gerard gets a few days of paternity leave as a reward for almost being killed about 1,000 times.) Hooray for America!

I enjoyed this film , action packed front the start to the finish. Pretty good story and good action scenes.

LONDON HAS FALLEN - London Has Fallen review by SM

A bit exaggerated and obviously a lot of IT involved in the making of this film, but it did hold me to my seat & at one point made me cry!! It scared me too as it seemed too close to a truth that could happen during this difficult times.

After the initial shocks, which are excellently done, if a bit unbeleivable, the continuing battle becomes a little formulaic, like a computer game. That said, it is exciting, and worth a look.

When Olympus Has Fallen was released in 2013, many critics and audiences hailed it as a version of Die Hard taken to the White House. With its over-the-top displays of Gerard Butler becoming a one-man army as Korean terrorists take the president hostage, there was something about its unapologetic nature of patriotism-fueled action that made it as exciting as watching Bruce Willis scale a tower. But, similar to Die Hard’s franchise progression, the sequel London Has Fallen attempts to capture lightning in a bottle with a new setting and the same game. After trying to save Aaron Eckhart from terrorists inside the White House, he has to save him from terrorists in the streets of London. Terrorists sure do love taking a whack at the president in this movie world.

Most of what this script does is repeat Olympus Has Fallen with minor changes. Namely, instead of Korean terrorists targeting POTUS, we have Islamist extremists donning the guns and rocket launchers. It may seem inappropriate the way the movies picks such a target during an age of exceedingly violent ISIS and the frothing Islamophobia that comes with it, but that’s how it plays into the red-blooded patriotism. It’s the type of picture that feeds the radical right so hard with rage and machismo that it will garner a standing ovation by the time the villain bites the dust. This type of shlock could be seen as fearfully offensive and maybe even propaganda to those who strive against violence in a time where there is so much. With progressives condemning the picture and conservatives praising it, I find myself in the middle laughing at the spectacle of it all.

I wanted to have the same level of cornball entertainment with London Has Fallen, but found myself struggling to get in the mood. The lightning is not back in the bottle for this sequel. Exact scenes are ripped from the original movie with slight altercations. There’s a frantic gun battle on the steps of a government building, but this time with a slightly higher body count. A large, phallic monument is destroyed, but this time it’s Big Ben. There’s a battle in the skies as helicopters are taken down by rocket launchers, but there may have been an extra helicopter this time around. It was at least partially hilarious when one pilot sacrifices himself by steering his helicopter into a missile so that it won’t hit the president’s copter. The fact that the pilot has enough time to actually receive the order, acknowledge it and move his copter into a blocking formation is just so unintentionally comical.

The destruction has been doubled as Big Ben bursts into flames and bridges of London literally fall down. Great - there goes my action movie script entitled “London Bridge is Falling Down.” There’s no cheesy line from either the villain or our hero relating to these events which is rather surprising. The film is so bombastic in tone it might as well crack some terrible jokes to go along with terribly cliché dialogue. Then again, the Has Fallen franchise seems to be a more earnest version of G.I. Joe in staging silly action to appear more earnestly serious.

Even the acting is ridiculously amped up to seem bigger and better for Olympus Has Fallen 2: Fall Harder. Gerard Butler lets his accent slip out more often and Aaron Eckhart has been reduced to a growling dog of a president. Eckhart just seems so angry in this role the way he grits his teeth when forced to speak on camera before his execution. I half-expected him to pick up a gun at some point and deliver the final blow to the terrorist leader. But poor Morgan Freeman is still stuck behind a conference room table as the eyes and ears for our heroes. They could have at least given him a chance to fly one of the drones that attack the terrorist base. It sounds stupid on paper, but, then again, just look at the movie we’re talking about here.

London Has Fallen may be a different setting, but it’s the same old maneuvers. Terrorists try to kill the president, secret service action man fights said terrorists, explosions occur and America prevails. Overly patriotic and laughably dumb action movies can be a lark, but it’s not exactly a script template that has me coming back for seconds. As with the overlong Taken franchise, the pattern really makes you question if Eckhart’s character is a good president if terrorists groups are this eager to pick him off. You think they’d be content with essentially turning London into a warzone and blowing up their monuments. The mind reels at how crazy the next group of vile international villains will be in taking him down. My guess: they’ll blow up the moon - “The Moon Has Fallen.”