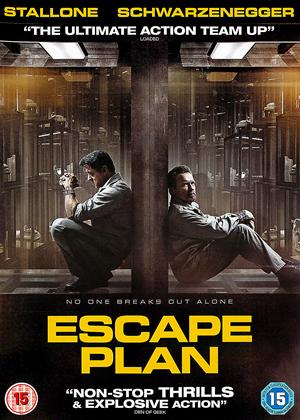 There is no point in judging this film on any conventional, it is Sylvester Stallone and Arnold Schwarzenegger re-living their pomp from the 80's. The storyline is utter nonsense but at least Arnie seems to know this whilst Sly plays it totally straight.

Yes it is trashy but a definite guilty pleasure having enjoyed the classic eighties movies of these two.

Actually lot better than hoped. Arnie looks like a good actor against Stallone, who only ever made 2 films effectively.....lots of follow ups though, and way rich, so he should worry..........Brubaker a possible fore-runner. True story run up very well by Robert Redford.....believe just re-made...........the warden who went into his new jail first, to see what was going on!

People have been waiting for a Sylvester Stallone, Arnold Schwarzenegger film ever since they both made it big in the 1908s. While there is less of a demand for it now, it has finally happened with Escape Plan being the film to bring them both together. While it’s nice to see the two playing off each other, it’s a shame it had to be in this formulaic prison break movie.

The film follows professional jail tester Ray Breslin (Stallone) as he is unwillingly dumped in a dangerous and mysterious prison designed for the worst of the worst, the criminals and witnesses nobody wants found. When he finds his way in he must find his way out but he will need the help of Emil (Schwarzenegger), a fellow inmate to find a way to the outside world to find out who put him inside in the first place.

Beyond the initial 80s nostalgia that the film brings about, there is very little to Escape Plan. The story is predictable and generic, the direction is plain and simplistic and the acting is just good enough to ensure people won’t complain. While Schwarzenegger has returned from his time as the Governator with a renewed passion, giving some of his best performances to date, Stallone has just given up, resigned to let his muscles do the talking.

However Jim Caviezel makes for a pretty entertaining lead villain, a mix of classic 80s tropes and his own added flair. He brings a certain element of camp to Escape Plan and oddly enough it feels as though its exactly what its missing. The moments he isn’t on screen lag and the film unfortunately follows the wrong 80s beefcake for most of the film.

He may well be the instigator of these little action throwbacks but Stallone doesn’t really care about the end result while Schwarzenegger still has love for his craft, something that i can ultimately appreciate even if Escape Plan is ultimately a misstep for all involved.