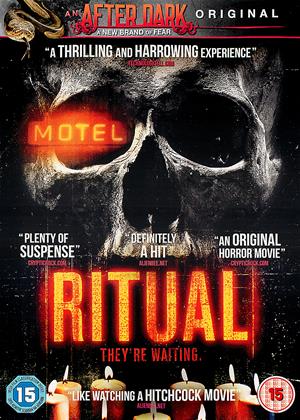 Synopsis:
After receiving a distressing phone call, a man arrives at a motel to find that his estranged wife has killed a stranger who is connected to a satanic cult. He agrees not to call the police and to help her dispose of the body, but what he doesn't know is that other cult members are on their way to the hotel, and they don't intend to let the couple leave alive.
Actors:
Derek Phillips, Larry Fessenden, Lisa Marie Summerscales, Dean Cates, Eric B. Fleischman, Mickey Keating, Brian Lally, Katherine Skelton, Stephen Brophy, Eric Martig, John Hugo, A.D. Peters, Benjamin Wright, D.J. Tijerina
Directors:
Mickey Keating
Producers:
Eric B. Fleischman, Chelsea Stardust Peters
Writers:
Mickey Keating
Studio:
High Fliers Video Distribution
Genres:
Horror

A young lady called Lovely (Lisa Marie Summerscales) is being chatted up at the seaside. She’s coy, all smiles. The next thing, we hear her disembodied voice on the phone crying, pleading for help. When her estranged husband Tom (Dean Cates) turns up to see her at a seedy hotel, he greets her desperate cries with all the sympathy of a sledgehammer. We soon see why. There’s a corpse in the room with her, covered in blood. Apparently, ‘this kind of thing’ has happened before.

Summerscales (who bears a resemblance to Billie Piper) is excellent in this, which is a role that really requires her to react to increasingly panicky situations. She’s never unbelievable or unsympathetic – even when the ‘corpse’ turns out to have secrets of his own.

Despite the leads’ unwillingness to call the police (although looking back, it’s just as well), I found myself fully invested in this. The performances are all strong, the atmosphere and music genuinely getting more and more unsettling. The direction is first rate – the hotel room, already seedy and unfriendly, takes on a more sinister tone when bathed only in the blinking static light from the television. The isolated nature of the location is powerfully utilised – poor Lovely’s predicament becomes increasingly hopeless.

There isn’t much gore, and very few special effects to speak of. None of this matters when a story is told this strongly – in fact, sparingly used as they are, the effects depicting Lovely’s deteriorating situation are all the more teeth-clenching. The setting, the 1950s, is effective and rids us of the convenience of mobile phones and the like.

Director, writer and ‘excited Cultist’ cast member Mickey Keating has provided a terrific debut with this slow burning, often deliberately muddy production (we don’t know much about the cultists and exactly what their ‘mission’ is, but that really doesn’t matter), which continues to restore my faith in modern horror somewhat. At times it seems as if events are passing too slowly, but there’s always a twist or a shock that makes sense of the decision. A dark, creepy, often claustrophobic story which remains compelling and unpredictable right until the end. Unnerving!