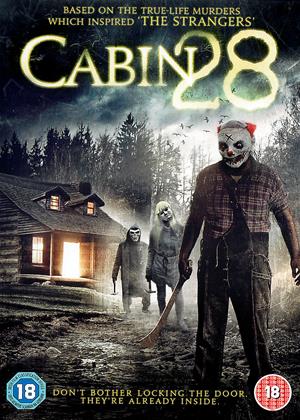 This is another film from the stable of prolific low-budget film-maker Andrew Jones, who has steadily made a name for himself as a reliable provider of horror cinema over the years. His sense of ambition is to be commended. After setting his previous ‘Robert and the Toymaker (2017)’ in Nazi Germany, here, he transforms Trefeglwys, Mid Wales into Keddie, USA. Sue (Terri Dwyer) and her appealing children’s stay in an isolated cabin is turned into a terrifying nightmare by the arrival of a group of malicious characters dressed as clowns. As the tag-line puts it, ‘don’t bother locking the door, they’re already inside.’ Low-budget or not, Jones’ films rarely pull their punches.

The main hurdle to overcome is the mangled collection of American accents. The younger cast-members are far less guilty of this than some of the more seasoned performers. These are non-Americans playing Americans; once you get that under your belt, the performances are universally pretty strong, especially Harriet Rees as daughter Tina. Rees, it seems, is part of Jones’ repertoire. Jones himself plays the mysterious ‘driver’, although with a heavily modulated voice.

Another stalwart is Lee Bane, without whom very few Jones films are complete. Here, he is Sue’s unpleasant ex, Marty.

Where the film occasionally falls down is not the acting, but the lack of ‘back-up’ that acting occasionally receives. Some key scenes are played passionately, but with no background noise or music, and almost appears to be performed in a vacuum and somewhat isolated. On plenty of other occasions however – for example, Sheila’s (Brendee Green) grim discovery towards the end – scenes are conveyed very effectively.

As is often the case with Jones, this is wholly enjoyable but not without a few elements that let it down. His films are always interesting, and a look at IMDB shows he has plenty more in the pipeline. I look forward to them.

So long as you accept this is a low-budget B-movies - one of many churned out in a matter of weeks (2 or 3) by the director, then you'll enjoy it more. This one is not written by the director - maybe why it has more dramatic tension that other films of his.

If you start thinking too hard about the plot holes, the sometimes wooden acting, the misjudged scenes (all black and white flashbacks here), the fluffed lines (the son says "they're both gonna x us" instead of "they're gonna x both of us" in one scene!); the limp ending; the cheap feel of it all - then you'll enjoy it more. It is what it is.

The accents are not too bad considering the actors are all British/Welsh not American and it's all filmed in Wales (and looked like Wales, frankly!)

The best thing about this is the soundtrack to be honest.

An OK Movie but left Open Ended as it is based on a Real Case that has No End .

A Story built up out of Guess work ,Points the finger but no real evidence and no real Outcome.