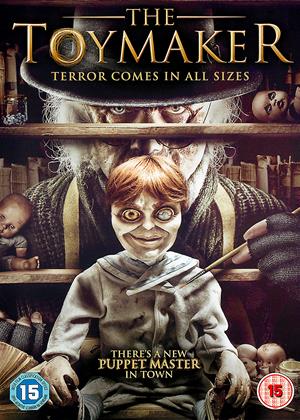 Reviews (1) of The Toymaker

Germany, 1941. A handful of Nazis – all the menfolk sporting designer stubble – are hunting a man who presents a threat to national security. Hoffman is his name, and he has apparently stolen a document that threatens ‘national security’. The document takes the form of a book.

The eccentric, elderly Amos Blackwood, Toymaker, gains possession of the book, and the strange powers therein inform his work: he owns a struggling local business, and the toys he makes appear to come to life. This is too much for his sole employee Abigail (Claire Carreno), who leaves and informs the Nazi officers of the document’s whereabouts.

It’s very brave for a low-budget venture such as this to attempt to recreate Nazi Germany, but despite a few lapses into modern dialogue, the results are commendable. For this is from the stable of Andrew Jones, who has quite a history of independent horror films, and this is his most polished. Stalwart Lee Bane labours under some rarely convincing aged make-up as the titular character, but his performance is a good one. Far from creator of monsters, the Toymaker is a figure who earns our sympathy, mainly due to monstrous behaviour of those around him.

As is the case previously, moving killer dolls are as frightening or ridiculous as you want them to be, but there’s no denying that, under the bleak, stuttering lighting, there’s some pretty creepy stuff going on here.

Great fun, well upto the standard of Jones’ previous work, and surpassing much of the early stuff.