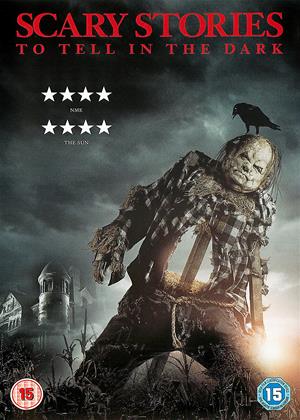 Rent other films like Scary Stories to Tell in the Dark

Reviews (2) of Scary Stories to Tell in the Dark

Family friendly horrors - and why not? - Scary Stories to Tell in the Dark review by NP

As Disney films increase their grip on cinema, there have been a few horror movies that seem to have adopted a kind of Disney-esque style. Nothing wrong with that. In fact, the idea of a family-friendly horror film has its merits. It all depends on what the viewer is looking for.

Guillermo Del Toro has proven himself to be very talented in producing the kind of filmic stories that straddle audiences – fusing a child-like fairytale whimsy with truly dark scenarios and creatures. His involvement here is fairly evident regarding that style, and there are many moments that you can imagine a youngster being comforted by the presence of parents who are also enjoying the frights.

Among the talented actors here, Zoe Colletti as Sheila Nichols proves to be the star of the show. Funny, brave, mischievous but never bratty, she carries the weight of the various set-pieces very convincingly – when she is scared, you know there’s in trouble in store. Equally, the various monsters impress during their (too) brief screen time. There are some imaginative nightmare characters: possibly my favourite is ‘the Pale Lady’, a lackadaisical obese creature with long dank hair. Only on screen a few moments, she nevertheless makes an impression.

This might not thrill those who are after something more genuinely frightening, but as a chiller designed to appeal to most ages, I’d say this does its job. My score is 6 out of 10.

A mild interesting horror compendium with some neat monsters but ultimately all a bit tame and somewhat clichéd. Based on a series of books this is a story about a group of youngsters who hide in the local haunted house while being chased by the school bullies. Inside they find an old book of ghost stories which one of them takes home. Soon the book begins writing new stories all by itself and each story has one of the group at its centre. Macabre and spooky events then happen to them one at a time. Despite the involvement of Guillermo del Toro who produces here this offers nothing much new in the genre, we have the standard haunted mansion with a dodgy history, there's a controlling ghost, an asylum, and some dark shadows. For some reason its set in 1968 with continued references to the approaching election of Richard Nixon but I struggle to fathom the relevance. The film has been produced with high quality but its a film for teenagers on a dark night after a few beers.

The film adaptation of the classic kid's horror book comes somewhat pleasingly and disappointing targeted at its younger audience. On the one hand, we have a horror story that takes care not just be mindless spookiness but has a point in relating to real-world events. On the other hand, it’s delivered with a very blunt staging, as though the filmmakers had to hold their hands to assure the message stuck about how reflective the chaos of the 1960s is frighteningly similar to the current climate. The result is a horror film that is more admirable for its intent than scary in its frights.

Taking place in the late 1960s in a sleepy American town, a collective a teenage social misfits are trying to find something to do on Halloween. A good source for all things spooky is the horror-loving teen, Stella (Zoe Colletti). She knows Night of the Living Dead by heart, has read tons of horror magazines and knows all about the town’s haunted history. So their Halloween night fun includes venturing to the old and abandoned of Sarah Bellows. So the story goes, Sarah Bellows killed herself within that decaying house and had been removed from all the photographs of the house. Legend speaks of her stories being deadly. So when Stella and her teenage cohorts stumble upon Sarah’s spooky book of horror stories, how could she resist? Sure, it’s printed with the blood of children but the stories could be good.

It turns out Sarah’s book is still a work in progress. Her spirit seems to be adding scary stories daily. And the characters are real people. And those real people are turning up missing. Surprise, it’s Sarah trying to kill them. Spooky but also somewhat standard in how the teens go about solving this mystery. They venture to the library and sneak into the hospital to look up records and find out what can stop Sarah’s string of killings. Her powers are extraordinary with how she can tap into the deepest fears of the teenagers. She can even edit old Edison tubes to scare the kids; that can’t be easy for a ghost.

The monsters she ends after the teens are pretty clever in design and staging. Consider the most accurate replication from the book’s illustrations of the Pale Lady, a wide and white woman with a big gut, wide smile, and small eyes. Assembled with practical effects, the lady lurches towards her victims in a contained environment where the lights flicker red and she can be seen replicating from every corner. Also, a brilliant design is that of the scarecrow Harold coming to life and not only gutting his victim but delivering some straw-based body horror as well. Speaking of body horror, the scene involving a pimple and spiders is brilliantly gross and rather unexpected for a PG-13 horror.

Where the film unfortunately falters is in its allegory that is oh-so-obvious. Don’t get me wrong; I appreciate that the film makes the effort to not fear relating the political problems of the 1960s to the issues we face today with racism and immigration. That’s some surprisingly profound content for what could’ve been a drowsy bit of teen horror. The only problem is that it makes its message so blunt and somewhat mixed. The character embodying most of these plights is Ramon, a draft dodger that is constantly harassed for the color of his skin. His plight is intriguing but it ends on a bit of a sour note that carries more obvious weight behind the message than his characters.

Scary Stories to Tell in the Dark doesn’t have a lot of scary stuff in it, unless you count the fears of today with the haunting past creeping into our modern politics. The film is worth it for the adult crowd for the competently staged monsters and the likable albeit brief charisma moments of the characters. At least the teen crowd will be able to take away a little more from this movie than not to read books written with blood.