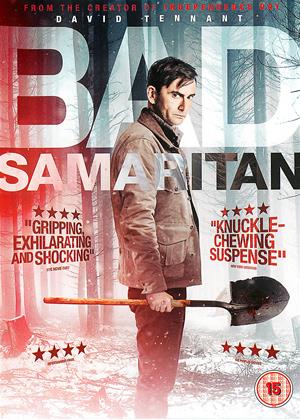 wish this film had been advertised better. I didn't even know itd been on the cinema.

The cast and acting is great. Lots of tension and drama.

this film isnt the same as, but If you like silence of the lambs, Severn, don't breath.

Then im sure youl enjoy this.

A slow film to start but once it does you will be gripped.Tennant is brilliant as usual .

I will recommend this to everyone who likes a good thriller

Possible SPOILERS.....Not a Bad Movie but it is hard to take David serious as a Baddie ,especially when he is putting on such a Bad American Accent. Why couldn't he just have his own voice ?

Creepy ,but we don't get to see much of what is going down until it has already happened so it looses out on the intensity of any Dark Crime taking place to Frame our Hero..

Bit slow in opening up about this character and his Years of Serial Kidnap and Murder. we don't actually find that out till almost the very end.

Watchable but doubtful I will see it a second time. That Accent was just too annoying .

There’s no doubt about it: mobile phones have made life so convenient, it’s impossible to imagine being without one. For horror story writers though, they must be a nightmare. If you can get a signal, you’re never truly alone, and help is always a distinct possibility. That’s why in many films, so many explanations are given as to why a phone has no reception, or the battery has died – it doesn’t often ‘ring’ true and makes it improbable that characters are truly isolated.

So it is good to see a horror thriller that makes such a virtue out of a mobile. Here, both the heroes and villain ensure this film’s fast pace by conducting much of their business with their phones – business that is fairly central to the plot, too.

It’s difficult to hear David Tennant’s American accent without thinking, ‘this doesn’t sound as naturalistic as his Doctor Who’, before recalling that his Doctor also spoke in an accent that wasn’t David’s own (excepting the story ‘Tooth and Claw’, where circumstances determined he use his own Scottish brogue). As a UK viewer, I have no problem with his accent as Cale Erendreich, other than perhaps why the character needs to be American at all.

With so much attention heaped on Tennant’s terrifically arrogant Erendreich, it would be unfair not to mention the other performers, all of whom are very impressive, especially Robert Sheehan as Sean Falco.

I really enjoyed this. It might have been gorier, but some will disagree. In this age where, thankfully, the good guys don’t always win, it remains uncertain, right until the final frame, who will come out of this intact, or come out of it at all. My score is 7 out of 10.

fun but too many plot holes - Bad Samaritan review by AER

Fun thriller of the kind that was on UK cinemas every week back in the late 90s - early 2000s. Good to see David Tennant hamming it up as a nutso woman abducter square off again Robert Sheehan. Too many plotholes and stupid moves by the main characters will have you shouting at the TV, and the ending was preposterous. Still we don't watch films like this to educated ourselves - it did what is said on tin. It passed the time nicely and won't tax anybody's brains. Nice product placement of Quick Lime! LOL

Really enjoyed this film as the acting was good and the story really gripped you.  David Tennant made a good villain.  I hadn't seen this advertised anywhere.  Don't know why it didn't get much publicity.  Nice to see a thriller that really does what it says on the tin - I didn't pause the dvd to make a coffee as I do with most films, I was hooked till the end.  Recommended.

A common trope of the thriller genre is the need for the film to go off the rails with finding something tense and exciting when it comes to the tale of a killer. The thriller genre by itself is flawed in this aspect for trying to contort a character that can get away with enough crazy crimes. But there seems to be a desire with many to break out into a full-blown action film for how far they go. Bad Samaritan is, unfortunately, another victim of this formula, starting off compelling and interesting, only to resort to cheap and farfetched theatrics to pull our interest over the finish line, tired and stumbling.

It’s a story that has potential. Sean Falco and Derek Sandoval are two young guys working the valet at a restaurant and grow tired of parking the cars of such rich clients. Seeking some extra cash, they use their valet positions to use the in-car GPS and rob the homes of the owners before they’ve finished their meals. It seems to have been working out well until they decide to rob the wrong place with the rich patron of Cale Erendreich (David Tennant). The house Sean breaks into seems surprisingly empty. Too empty. And then when he finds his computer and checkbook, he happens upon a kidnapped woman in the corner. What to do? Does he go to the cops and risk going to jail to save this woman or does he forget about her and go about his robbery? Since Sean is the main character we want to like, he naturally decides to help her but won’t be able to when on the clock. And since Derek isn’t as sympathetic, he’ll argue against doing something about this discovery.

Sean’s new mission shifts from robberies to saving the girl and it proceeds a puzzling nature about how to go about proving Cale’s sinister nature. It’s not easy. After a police visit, the cops decide not to search Cale’s place with little evidence against him. Sean breaks inside again but finds no sign of Cale’s kidnapped woman and dungeon-like torture room. He’s got his work cut out for him. And Cale is clearly onto his game and tortures him by targeting his girlfriend and breaking into his place, taunting and teasing before moving in for the kill.

While build-up is certainly an interesting one, it takes an almost painfully predictable route which will eventually lead to Sean seeking out Cale’s secluded cabin with his hostage in tow. And this is where the suspension of disbelief has to kick into high gear to enjoy the spectacle of a missed gunshot, an odd plan to get rid of the evidence, and lots of cackling and monologuing before leading to a chase through the woods. You’ve gotta have a chase through the woods. Well, you don’t but they’re already shooting there and you have all those trees - might as well make the most of it.

But perhaps the most distracting aspect of the picture is David Tennant’s attempt to foster an American accent over his natural Scottish one, falling flat and odd during many scenes. Perhaps the most bizarre of readings comes from his climactic and taunting yells which seems to slip and slide all over the place of American accents. What would’ve been a neat twist is if Tennant’s character secretly Scottish the whole time, leading a double life in America after killing so many across the pond. It doesn’t sound too strange when compared to the other silly plot inclusions.

Bad Samaritan is such a stock thriller that rarely finds its way out of being anything more than passable. At one point Sean’s girlfriend bashes the killer with a shovel and screams comically “That’s how you rescue someone!” Except the killer will get back up because she didn’t double tap. Sorry, movie, you don’t get to mock convention when you can’t get over your own.