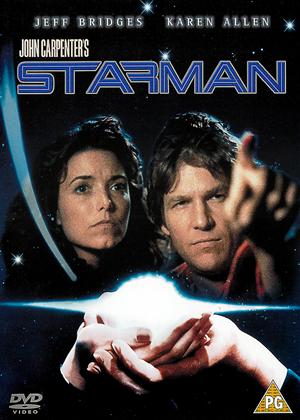 OK but too 'girly' for me - Starman review by RP

I've been catching up on a few Jeff Bridges films that I had missed on their cinema release, and came across this one from 1984. It's a romantic / sci-fi / comedy film, if that combination is possible. It stars the young Jeff Bridges (well, 35 years young) putting on one of his 'goofy' acts as the 'Starman', an alien whose craft has crashed on Earth (after being fired on by US planes) and who must get to a specific location in Arizona to be picked up by the mother ship.

Karen Allen plays Jenny Hayden, a young widow, and the Starman adopts the form of her late husband. She drives him to the rendezvous and along the way there are car chases, crashes and an assortment of mild adventures, and of course a romantic interlude.

The storyline is very much one from the 1950s pulp 'space fiction' stories and feels dated even for the year in which the film was made. OK if you like that kind of thing – it's not an unlikeable film but I found it a little too 'girly' for me, although it certainly made me smile a few times. I'll rate it 3/5 stars.