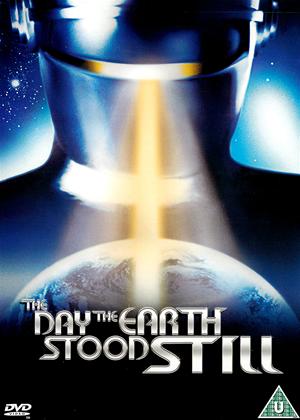 Rent other films like The Day the Earth Stood Still

Reviews (3) of The Day the Earth Stood Still

And i for one think there shouldn't be any doubt about that.

It's a film with a big message that still resonates today, to look beyond division and set aside these differences to work for the common good. Some of the effects were a little suspect however, like the wires in one scene near the end which were horribly obvious, but aside from that the original 'The Day the Earth Stood Still' has stood the test of time to remain one of the great films leaning more towards the Science Fiction Genre.

I personally have no desire to see the remake released in 2008.

a classic; the film that helped forge our modern idea of science fiction. a must see. - The Day the Earth Stood Still review by tm

not to be confused with the dreadful remake. this is a sharply observed and well executed masterpiece by Robert Wise (who also did the sand pebbles, the curse of the cat people, west side story and many other greats.)

Michael Rennie is excellent as the detached and somewhat bemused alien, Patricia Neal captures the complexity of a strong and sensitive woman torn between trusting her own judgement and following the mood of those around her. The supporting cast ar solid in depicting th evolatility of the public mood, fickle, paranoid, excitable, irrational and easily led.

the plot is simple and direct and explores mankind's propensity for violence and indifference to the world 8that nurtures him. many of the motifs anticipate so many later concerns with the environment, democracy and the abuse of the truth by the media and governments.

Timeless sci-fi classic that established the approach of grounding its fantastical premise in an ultra-realistic environment which gives the story credibility. The alien encounter is observed against the familiar monuments of Washington DC, as well as ordinary suburban streets.

Michael Rennie is Klaatu, a mysterious, humanoid space-traveller (in a silver suit) who parks his flying saucer outside the White House and informs humanity that in an age of potential nuclear conflict that it presents a threat to the rest of the universe and must pull back from the precipice. Or else. It's a film with a message. The tall, angular Rennie is wonderful casting as the Christ-like visitor, an alien who presents an intellectual otherness that didn't need hours in makeup..

Bernard Herrmann's futuristic score, featuring theremin, is atmospheric and eerie, and would prove to be influential. The visual effects are superb. Robert Wise presents the leaders of the world as suspicious, territorial, insecure and narrow-minded. When Klaatu goes among the ordinary people, he finds they are the same!

Rennie as Klaatu has become a fabled figure in science fiction and his instructions to Patricia Neal, Klaatu barada nikto, have lived on in other books and films. Curiously the solution of the other civilisations of the universe to the threat of nuclear war is basically Mutually Assured Destruction, which is where mankind was heading anyway!