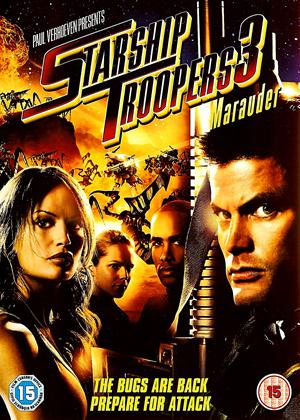 Here comes the third installment of the straship troopers trilogy. I am pleased to announce that this film certainly doesn't dissapoint. For those of you who were miffed off at the second chapter of this sci fi spoof. Can put their fears aside. AS this is not a sequel to far as many film trilogies are.

What stands this out from the other films is a good dose of humour and a feel good story. The CG effects and sleek editing make it a joy to watch.

I have only one slight reservation and that is there isn't enough goo from the bugs. But everything else makes it a gem to watch

To summarise put this in your list to both enthrall and entertain you.

It's awful. It's a stinker. It's dire. Sadly, it could have been so much better - Starship Troopers 3: Marauder review by RP

The original film in this series was excellent, combining an action packed sci-fi 'creature feature' with social satire and irony. The second wasn't too bad, leaving out the irony and building instead into a sci-fi horror flick. I was looking for this, the third film, which brings back the lead character Johnny Rico (played by Casper Van Dien, who hardly looks much older than in the first film, 11 years previously) to get the franchise back on track again…

But this is dire. It's awful. It's just silly. The script is bad, the acting is bad, not just cardboard characters played tongue-in-cheek, but simply bad - but the worst thing is that it could have been so much better. The social satire is there (the future is fascistic, where dissent and protest is treated as treason, and there is an apparent need for a never ending war against 'the bug'), there is satirical comment on religion ('good' religion = Christianity, 'bad' religion = worship of a false god, a different god, here a 'bug god'), and there is a bit of alien splatter and a few bare chests thrown in for good measure.

But there isn't enough action, there aren't any pitched battles against hordes of bugs as in the first film, and last but not least - the creature effects are poor.

I really like the original 'Starship Troopers'. But this is a turkey. It's a stinker. I'll give it 2/5 stars because I really have seen worse, but it doesn't deserve such a generous score.