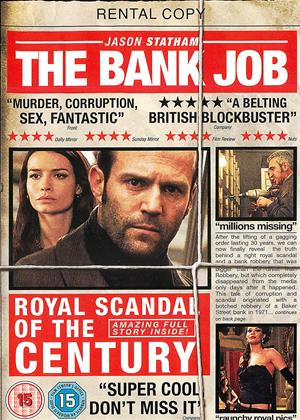 Reviews (6) of The Bank Job

Supposedly based on the 1971 Baker Street robbery - look it up on Wikipedia. The story goes that the robbery of safety deposit boxes in a Barclays bank vault was a ploy to recover compromising photographs of Princess Margaret used as blackmail material by Michael X and subsequently covered up by MI5 - at least it gives a twist to the story.

This is definitely one of Jason Staham's better films - although he plays a jack-the-lad amateur bank robber, it's not in the over-the-top 'mockney' style of Guy Ritchie but a rather more believable character - and there's no silly martial arts stuff either. The script is by Dick Clement and Ian La Frenais so you know it's going to be really well written.

I rather enjoyed this - I'm tempted to give it 4/5 stars even though that seems over generous. Watch it if you like heist movies - it's not at all bad.

Nostalgic with characterisations - The Bank Job review by AB

A very good British film with a wonderful script by Clement and La Frenais and great character acting by all involved.

worth Watching - The Bank Job review by CP Customer

Baased on a bank robbery in September 1971, which netted over 3 millon pounds. No one was ever caught and the money never recovered. The storyline is based on the assumption that the secert services were involved who were trying to cover up a Royal scandal. The movie is fast paced and very enjoyable well worth watching.

This is one of the most beautifully scripted films even more amazing that it was taken from a real burglary. The acting is a bit minder / softly softly and does not really convince. I would recommend just because it is so incredible that it really happened.

A good heist movie, which is nevertheless a bit formulaic - The Bank Job review by Philip in Paradiso

This is a good heist thriller in the tradition of the bank robberies executed through the use of skill and intelligence rather than force and violence: the London-based gang tunnel under the bank from a nearby building to reach the vault where the safes are kept. The story is based on the 1971 Baker Street robbery, i.e. a true story, although the movie extrapolates quite a lot on the basis of the (limited) facts, giving credence to the rumours that have floated ever since the robbery itself as to what led up to it and who was actually behind it.

It is a good, entertaining film, but there is something a little bit predictable and formulaic in the acting, in the dialogues, and in the whole project. Somehow, the characters lack depth, even though much of the story actually is true...

It is not a masterpiece, but it's a good film and I would still recommend it, overall. I did enjoy watching it.

Great heist film about the Real Baker Street Robbery in 1971 Takes liberties with the actual realities of the crime. No D Notice was ever issued in real life, But great heist film all the same.