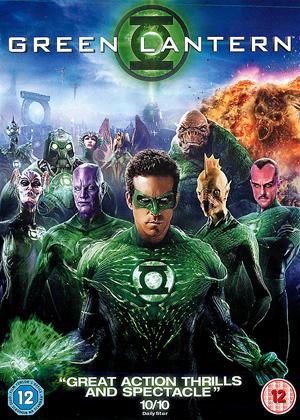 I have been reading comics, mainly DC comics, for the last 30 odd years and with the exception of a few Batman movies DC charcters just don't seem to transfer to film all that well unlike the Marvel cannon is doing at the moment.

I wanted to 'love' this movie but it just seemed to have a tired story, too much flash bang to make up for it with some ok special FX. Were my expectations too high? Maybe, but that is what I want from the DC heros from my childhood, I want them to be bigger than the screen I am watching them on and I really didn't feel that!!

‘Green Lantern’ follows the sudden adventures of Hal Jordan (Ryan Reynolds), a happy-go-lucky test pilot who gets thrust into becoming a superhero. Hal is fine as he is: regular, talented pilot-guy who happens to be arrogant about it. He likes to fly planes but doesn’t care enough about safety.

One day, a purple alien lands on Earth and he is gifted a ring and a green lantern. After Hal pledges his allegiance to it, he is transported to the world of the Green Lantern Corps, a band of universe-protectors alien and with Hal with the ring, human in it. From there, Hal begins his training as a Green Lantern and as the evil force called Parallax is about to invade Earth, he must cast off all fear and be the hero he was supposed to be.

As far as comic book superheroes go, Green Lantern isn’t exactly as popular as Batman, Superman, Spider-man, or the X-Men. He’s more Thor or Aquaman in fan bases, so it was quite a surprise that even a movie was produced about him. Ryan Reynolds as Green Lantern, with his good looks and amazing abs, do Hal Jordan right but you’re left to wonder why anyone as smug as him could be ‘chosen’ by the universe itself as one of its heroes.

The Green Lantern Corps and their world is a feast to the eyes, what with their CGI-savvy rendered on screen. Mark Strong as Sinestro is a commanding presence. The Parallax is threatening enough but not as frighteningly good as big-head villain Dr. Hector Hammond played by Peter Sarsgaard. Why do some superhero movies go all out with a bang with the special effects and forget all about the story and acting?

‘Green Lantern’ would have been a great surprise if its storytelling was as tight as its CGI. Hollywood seems to think: ‘Make a superhero movie and they will come’. Unfortunately, Ryan Reynolds’ abs can’t save this movie.