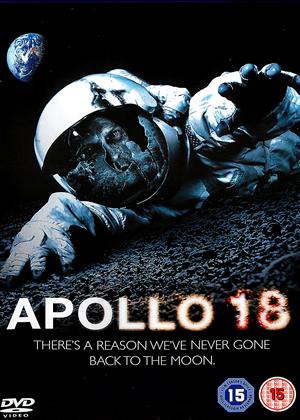 Synopsis:
Officially, Apollo 17, launched December 17th, 1972 was the last manned mission to the moon. But a year later, in December of 1973, two American astronauts were sent on a secret mission to the moon funded by the US Department of Defense. What you are about to see is the footage which the astronauts captured on that mission. While NASA denies its authenticity, others say it's the real reason we've never gone back to the moon.
Actors:
Warren Christie, Lloyd Owen, Ryan Robbins, Michael Kopsa, Andrew Airlie, Kurt Max Runte, Jan Bos, Kim Wylie, Noah Wylie, Ali Liebert, Erica Carroll
Directors:
Gonzalo López-Gallego
Producers:
Timur Bekmambetov
Voiced By:
Thomas Greenwood
Writers:
Brian Miller
Studio:
Entertainment In Video
Genres:
Horror, Sci-Fi & Fantasy, Thrillers

A Space Flop of the dullest proportions! - Apollo 18 review by CS

Since the success of The Blair Witch Project, we have seen a mass of badly made, cheap films coming out, that seem to be simply cashing in and nothing more! This film 'Apollo 18', comes across as a slick horror film in the advertising, but is sadly nothing of the sort. Basically it is three men in space suits pretending to go to the moon, one of them stays in the orbiting capsule whilst the other two land on the moon. They walk around in their space suits or drive around on the space buggy, all of this appears to be filmed on cheap portable hand held cams, switching from colour to black and white, as in The Blair Witch Project'. Placed over the top is a dialogue between all three spacemen and Houston back on earth. Now and again you see what looks like a fuzzy image of a small rock turning into a spider, at the end of the film said rock spiders attack the crew and that's it! So you are looking at an hour and a half of what could have been made by some college students on a budget of £500, I could have made this film myself with a cam and a few mates, it really is that basic and simple! The script is incredibly poor, the acting non-existent and why on earth this has a 15 certificate is beyond comprehension as there is nothing in this that is any more frightening than a Tom and Jerry cartoon! All in I feel that the publicity material and the 15 certification suggest that this film is much more substantial than it is. Alongside The Blair Witch and Cloverfield, this must rank as one of the worst films ever made and artistically I cannot see why they bothered!! I find nothing to recommend this film apart from recommending that you give it a miss!!

An interesting concept, filmed in a documentary style, hand held camera, with some excellent low key effects. It slowly builds from a nervy beginning to outright horror. The acting by an unknown cast is excellent.

‘Apollo 18’ is a movie from director Gonzalo Lopez-Gallego, the first English-speaking film from the Spaniard. In this sci-fi-meets-horror flick, we watch the three-man crew of the NASA space mission ‘Apollo 18’ sent to the moon in 1974 to intercept Soviet signals. But the astronauts find themselves not alone. There’s something more sinister roaming the surface of the moon, and it’s up to them to figure out what’s going on… if they come out of it alive.

TV veteran actors Warren Christie, Lloyd Owen, and Ryan Robbins play the doomed astronauts in ‘Apollo 18’. They are cast well enough; they do the Everyman who happens to work in space impeccably. We see them as random human beings but since there’s not much back story to them, when they become in peril, we don’t exactly feel for them that much. Maybe it’s the astronaut gear from head-to-toe that obscures our perceptions of them. In the end, they only become victims instead of heroes.

With a style reminiscent of ‘Blair Witch Project’ and ‘Paranormal Activity’, ‘Apollo 18’ joins the club of making a thriller out of found-footage and editing it into horrific proportions. Although marketed as a horror movie, NASA had to release a statement that ‘Apollo 18’ is not a real documentary sanctioned by their agency. Space missions by them are already suspect; this only makes things more conspiracy theory-worthy, if you ask me.

What ‘Apollo 18’ is rich in controversy, however, it lacks in fright. Too bad, the premise in itself is an interesting lure, but the hodge-podge editing, the little care given to how it paces itself, you get a payoff that turns out to be a dud.

We can’t fault the limited budget it has for the execution; low-budgeted films result in greatness. We can’t even fault the material; it’s there, just barely given a good treatment. Watch ‘Apollo 13’ instead.