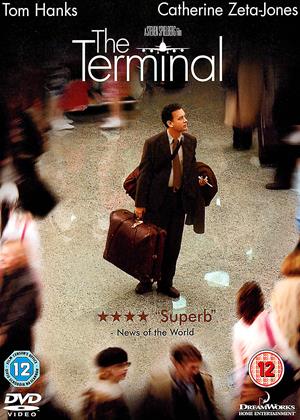 Reviews (8) of The Terminal

If you have nothing else to do. - The Terminal review by CP Customer

This was a mediocre movie, Tom Hanks adding all the magic as usual. It plays through a pleasant, humorous storyline and has a lot of little quirks that are somewhat cliché to the situation and location; similar to Castaway. The down point of the film for me was the farcical situations that were added to fill a film that should have ended way before it actually does.

Cast Away in JFK - The Terminal review by CP Customer

Viktor Navorski is a traveller visiting America from the fictional Eastern European country of 'Krakozhia'. While Victor is in mid flight his country suffers a military coup, and when he lands at New York's JFK Airport he finds he's a citizen of a country that is no longer recognized by the U.S government, all passports issued by Krakozhia are suspended, all visas revoked, Victor is left stranded and the airport's chief of security restricts him to the international transit lounge until the bureaucratic problems are resolved. While he waits, Victor develops friendships with airport staff, devises ways to make money, learns English, and romances a flight attendant, while the chief of security tries every method he can devise to get Victor to leave the airport so that he will become someone else's problem. While most of the film is spent watching Victor bumble around the transit lounge trying to find ways to make money, the first half of the film is pretty decent. Hanks is funny, charming, compelling, and much like his role in 'Cast Away' he's a man in a foreign land with only his wits to help him survive. However, the second half soon becomes dreary, sentimental and contrived as Catherine Zeta-Jones's character appears as Hanks' love interest, and this alone slows things down and makes the already implausible plot even more unbelievable. Overall, 'The Terminal' is very much like 'Cast Away', as it's a film without much of story and simply more a vehicle for Tom Hanks, with Hanks' performance the dominating element within the film. The trouble is a sweet, charming man living in an airport lounge isn't enough of a film to pass itself off as two hours of entertainment.

I can see how people enjoy this film, but it lacks depth to the point of narcolepsy. Pointless, but still a must see for die-hard Tom Hanks fans.

I suspect this is a love it or hate it Movie. I loved it! long and a bit drawn out in places, but a good all round story with some very funny bits.

What a pity this has actually happened, to some people!! trapped in an airport, no way out!

Viktor (Hanks) makes the best of a bad situation and quickly improves things for himself.

Worth watching I think.

Hanks back to his Best - The Terminal review by CP Customer

This was a truely watchable film with great comedy moments, its shows Hanks back to the level that we have seen so many times before. Its well worth watching.

I loved this film. Hanks unusually plays an eastern european. He excels in the film; the plot is not fast paced but has a few unpredictable twists. I thoroughly reccommend it as an uplifting and enjoyable watch.

Spinning Plates get laughs. - The Terminal review by CP Customer

I just thought this film would be ok, I had heard that it was nothing like the true story it was based on. It takes a lot to make me laugh and this film made me roar with laughter... it was so funny, sweet and brilliant. I'de recommend it to any one.