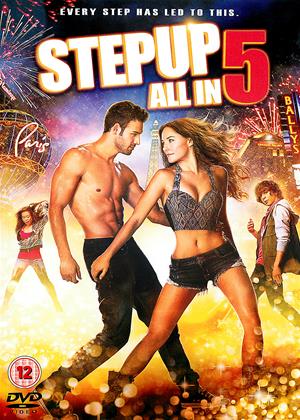 Reviews of Step Up 5: All In

Step Up 5: All In review by Mark McPherson - Cinema Paradiso

These Step Up dance movies have a lot in common with romantic comedies. In the sense that nobody goes to a romantic comedy for the plot since they’re all the same, nobody watches a dance competition movie for the script. At least, I hope nobody is that dense entering into the fifth entry of this franchise. After four films of hokey characters and predictable stories, all that one really has hope for at this point are the dances. And thank goodness that with Step Up All In everything is thrown at the screen.

This is a more over-the-top, ridiculous concoction of a dance movie that wastes no time chucking originality or believability out the window. A massive group of dancers struggling in life all come together for a dance reality show as if they were forming The Magnificent Seven (though in this case it’s more like The Magnificent Nineteen). They all collaborate under the name LMNTRX (element-tricks) on a very elaborate dance video staged as a mad scientist’s experiment complete with Frankenstein’s monster, electric tesla coils and straight-jacket dancers. This type of video is top notch on production and alone could land them a gig doing dance setups anywhere, but this is apparently only good enough for an entry video.

The reality dance show is The Vortex hosted by an overly-dressed diva on VH1 (as if VH1 would ever spend so much on a show so extravagant). The dancers compete on a small stage of stairs, a boxing ring and finally a massively tall room that seems to be ill-suited for any other activity besides a circular dance stage. The first two stages of dance are actually pretty unique, especially in the boxing ring where the dancers utilize the slight bounce of the surface. But it’s the final stage that pulls out all the stops and apparently the entire budget of the program. Dancers descend from high ceilings, emerge from pits of sands and twirl sticks of fire like they’ve been doing it their whole lives. This is not a dance competition at this point; it’s Cirque du Soleil with hip hop music.

I haven’t wrote much about the plot or the characters because there isn’t much to say. There are far too many characters introduced and none of them have any real interesting arcs. We see the lead male dancer try to woo a female dancer who is cautious about getting involved. We see the clever geek try to win back his girlfriend after getting a little too close to his dance partners. We know exactly how this is going to play out and the movie realizes this too as it never harps too long on these moments. They are, however, nicely punctuated by more dancing. It doesn’t matter how silly it is when feisty boy meets feisty girl with a dance duel. At least it doesn’t involve anymore soapy or bland dialogue. I’ll gladly take goofy dancing over eye-rolling lines any day.

While I’ve never been a fan of these Step Up movies and still not after this movie, All In at least entertains enough to keep your eyes off the clock. It’s a ridiculous movie, but, then again, dance movies are never going to win an Academy Award. All they can really do is deliver on some impressive dance sequences and this movie has plenty that go for the absurd. And with its stock characters and simple story that are all clearly low tier, you have to go to that level of the implausible. In a strange way, Step Up All In throws an ample enough of crazy at the screen to make for an entertaining experience that the unfortunate parents who get dragged into this won’t be as bored.