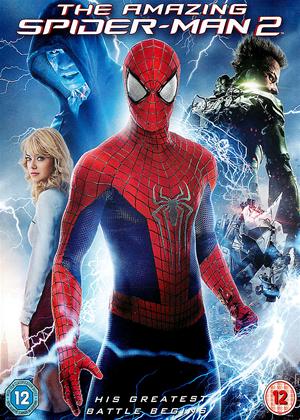 Reviews (5) of The Amazing Spider-Man 2

MARVEL not so MARVELOUS this time! - The Amazing Spider-Man 2 review by DG

Marvel is normal dependable for a gripping action-packed, wow-how-did-they-do-that type film. This was not of their normal elk. It was, well.. just soppy!

This spiderman was such a talker!! And half the time cocky far beyond endearing...way beyond. Okay, in the other spiderman films there was moments of cockiness but they always resulted in his downfall, but in this one he was just annoyingly cocky throughout without a lesson learnt. I just surprised no one he saved ended up slapping him!

Needless to say, I advise the other spiderman films over this. That being said, as an avid Marvel fan if they were to bring out a amazing spiderman 3 i would watch it, in vain hope that it would of improved! But I defiantly glad i watched this on DVD rather than of paid out for the big screen!

That's twenty minutes of my life I won't get back. - The Amazing Spider-Man 2 review by CP Customer

Simply dreadful, like some sort of nightmare Spiderman/High School Music hybrid (fortunately without the singing, but maybe that came later, I will never know!). Just about every aspect of it, particularly Garfield, irritated me to distraction. One star for the first 5 minutes.

The first "Amazing Spider man" was poor compared to the previous trilogy but this second opus we found was much better. The plot is more interesting, the characters and acting are more endearing. I have never been interested in the super-villain action-packed mandatory scenes, instead I prefer the character development and long plot lines.

This film covers the early Peter Parker years better and gives enough background about his parents and their disappearance.

Garfield found his mark in this film and the humorous quips during the action scenes are better.

It is a bit disappointing that they felt they should start the third film at the end of this one instead of properly closing the movie.

Liked it. - The Amazing Spider-Man 2 review by AC

Liked the film, although I not my favourite. Garfield is a good young actor, and plays the part well enough. Good action as always in these films, enjoyable watch.

For me I prefer the other Spiderman films, they are better made and better storys. For me aswell this actor isn't as good at acting like Spiderman, These films are poor compared to the others.

While I was a huge fan of the rebooted Spider Man universe that director Marc Webb had built in The Amazing Spider Man I couldn’t help but be disappointed by the latest adventures of the masked vigilante as Webb is forced to introduce a plethora of new villains in preparation for the Sinister Six movie and while the stakes seem high for this latest outing, its all for naught in the end as the film is overstuffed and emotionally stunted.

the latest chapter follows Peter Parker (Andrew Garfield) as the titular creepy crawly hero as he tries to contend with protecting the city he loves from the new era of super villains while dealing with his unresolved feelings for Gwen Stacy (Emma Stone). However when Max Dillon (Jamie Foxx) is turned into the sinister Electro he must protect those he loves while defending a city full of frightened citizens unsure that Spider Man can protect them this time as villains seem to emerge from the woodwork looking for a piece of him.

While the central story is entertaining enough with Foxx making a thoroughly likable villain the film has trouble balancing all the different story threads that the film has to contend with, like the truth behind his mother and father’s disappearance, the emergence of Harry Osborn (Dane DeHaan) and the Green Goblin and the slow methodic plodding towards the Sinister Six. The film just has too many aspects to it that the central romance between Gwen and Peter gets lost in the shuffle.

Another problem is the fact that Peter as a character is a lot less entertaining in this instalment of the series as he flits from moapy to self righteous and back again for almost the entire run time with a few choice jokes, each of which fails to hit the mark, interspersed within. Stone however is still on top form and she makes Gwen Stacy’s story in the film seem almost poetic despite the lack of script quality.