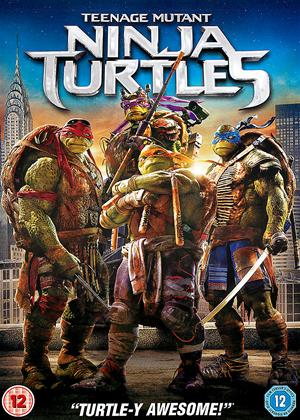 I really enjoyed this and I wasn't expecting too. This is so much better than the original Turtle films.

While remakes can bring in new generations of viewers, it is also one of the things ruining the film industry. There are so many good scripts out there ready to be made into great films, but they are not getting made. This ‘remake’ of Teenage Mutant Ninja Turtles has absolutely nothing on the originals, and I give it a generous two out of five stars.

Teenage Mutant Ninja Turtles: Things are not looking good in New York City. Shredder and his evil Foot Clan have got everyone and everything under their control. Enter four outcast brothers - Leonardo, Michelangelo, Donatello, and Raphael. From a life of living in the sewers, these bi-pedal turtles discover they are destined for much more. They are the Teenage Mutant Ninja Turtles, and with the help of reporter April O’Neil and her cameraman Vern Fenwick, they will face-off against Shredder and save New York.

First it is important to say that I fully understand this film is for younger kids and not the viewers that grew up with the cartoon series. I like that the story is continuing on and more generations are able to meet these awesome characters, but, in my opinion, they did not do a good job.

The visual effects were not too bad. Having the completely computer created creatures interacting so closely with real-life actors and environments is not a simple thing to do, but they made it look quite realistic. The colouring and lighting effects also gave an interesting and gritty feel.

Unfortunately, the human aspects fall well short. I have seen the majority of the actors in more television shows and movies than I can count, but they still could not turn the film around. Will Arnett, William Fichtner, Noel Fisher - they are all great and entertaining actors, but you could not tell that from this film.

All of these things together do not make a very good movie, but it is even worse with the generic story and lack lustre script. The dialogue is not funny and there is not much that makes it any different than what we have already seen done better in other films.

Online forums and print reviews have been predominately negative, which is a real shame because the original series was something loved by many.

Growing up, my brother was obsessed with all things related to the Teenage Mutant Ninja Turtles. He still is. Even just seeing the trailer for this new film, I knew it was something he would not like, and I did not like it either. There have also been rumours of late about this only being the beginning of the re-franchise, and Fichtner has announced he has already signed on for three more TMNT films.

I am not a fan of this one - too much influence from Michael Bay - but I am sure there will be a new wave of little kids collecting TMNT toys and trading cards.