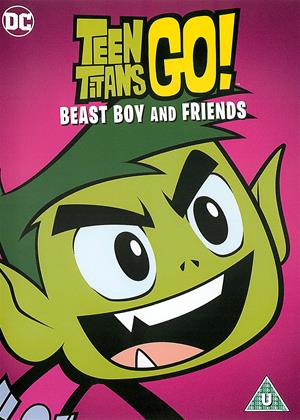 Synopsis:
Raven, Cyborg, Starfire, Beast Boy and Robin are ready for a supersized adventure everywhere they go. Between bringing down the bad guys and tackling their chores, these teen heroes always squeeze in some hilarious pranks...and pizza. Team up with the Teen Titans and get full off the action!

By this point in the series, Teen Titans Go has settled into being the staple of Cartoon Network, the Spongebob Squarepants to Nickelodeon if you will. In many ways, this would make it an easy target to tarnish, especially since the numerous fans of the previous semi-serious Teen Titans cartoon were already out for blood before this show even aired. But as someone who has grown up with DC Comics for the longest time, I must admit that this show tickled me just right for being little more than silly and satirical goofing on DC Comics.

This selection of eight episodes is mostly random though it has come branded with the character of Beast Boy gracing the title and cover. In many ways, Beast Boy represents the soul of Teen Titans Go, being the most childish of the bunch and most likely to laugh at his own jokes. He embodies the jovial nature of the show that rarely ever wants to take itself so seriously. His childish nature makes him a naive player in such wickedly satirical episodes as Pyramid Scheme where, as the title implies, he is roped into a villainous pyramid scheme to afford presents for Cyborg.

The issue of Beast Boy’s childlike antics are brought up a bit in the episode BBBDAY, where it is Beast Boy’s birthday and he’s dismayed to see that none of the Titans care to celebrate it. This sends Beast Boy whirling though his animal-morphing abilities as becomes younger and older, trying to come to grips with the process of age if birthdays seem to be both meaningless and beyond the aspects of celebration. Of course, such a topic is never given much deeper contemplation on age and is more or less just a slew of gags to see Beast Boy as a baby and a grandpa.

It’s these interesting angles to the show that are given a goofy savaging to keep the show on track. One would think that Beast Boy may be beyond birthdays but considering this is a show where the wee versions on the Teen Titans dabble in babble of pizza, waffles, kittens and farts, such childish antics are not beyond them considering their demographic. There is a certain appeal to this as well, harkening to the cute allure of the DC Comics title Tiny Titans, meant to appeal more to the younger crowd with its crayon-like assembly.

Most episodes are fairly simplistic cartoon formulas, however, having more in common with Looney Tunes of yester-century than the Teen Titans of yester-decade. The episode Ghostboy embodies this best, bringing in the classic formula of a character believing they are a ghost to teaching them a lesson. Mostly predictable antics ensue, per the show’s penchant for slapstick.

There’s a bit of a savage nature at time to this more wicked elements as well as being largely referencial to DC Comics in hilarious ways. One of the most interesting episodes that explores both angles is You’re Fired. In the episode, Beast Boy makes a mistake on a mission and it results in the destruction of an entire planet. Rather than face some tribunal to settle his punishment, his sentence is reduced to merely being fired from the Titans. His replacement are The Wonder Twins, a dug-up duo from the Superfriends cartoons. And the show proceeds to have it out for Stan and Jan as Beast Boy attempts a sabotage of both of them.

As I’m sure the detractors of this series will most likely note, Beast Boy comes off less like a hero and more like a troublemaker. But to a degree this exaggeration isn’t too far off considering his presence in the more grittier iterations of the Teen Titans always carried a bit of youthful pluck. This show merely brings it out to the satirical extreme, as it does with all characters. And I must admit that I laughed quite a bit at these very simple-minded and manic displays of superhero sillies.