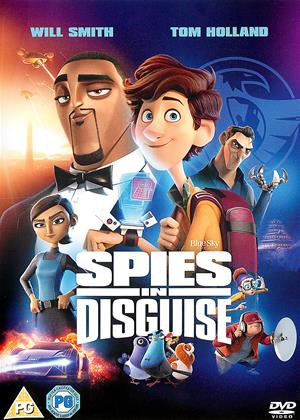 Reviews (1) of Spies in Disguise

I would recommend this if you want an animated film that is enjoyable and fun. It's by no means a classic but its above average and will keep you entertained throughout.

There was a genuine surprise to such a film as Spies in Disguise. Of the many trailers for such a film, I made the assumption that the film would be a mere fish-out-of-water spy adventure of a human trying to fight crime as a pigeon. While this aspect of the film is certainly present, the film is more intriguing and unique for questioning both the uneven relationship of hero and scientist while also questioning the very notion of violence. The last thing I expected a film like this to do is questioning the very nature of aggression in a genre that usually thrives on such theatrics.

Lance Sterling (Will Smith) is established as a cocky secret agent of the American government. He relishes the chance to fight his way out of a room filled yakuza, using a massive salvo of secret gadgets to stop the bad guys and get back whatever stolen weapon needs to be found. Though the agency he works for has an entire department of skilled technicians to make everything from bombs to missiles, the misfit of the lot is the young prodigy Walter Beckett (Tom Holland). Having developed tech since he was a wee kid, Walter has specialized in developing weapons better meant to protect the world than blow it up. His highlight is a bomb that doesn’t shower fire but glitter and holograms of cats, a sight which he believes can trigger emotional responses that can hinder the enemy. He essentially wants to kill with kindness.

Naturally, Lance doesn’t dig this philosophy, especially when it conflicts with his mission, despite working. But when Lance finds himself framed by the evil terrorist Killian (Ben Mendelsohn), he needs some help for someone like Walter. His mission of clearing his name and stopping an army of drones becomes all the tougher when Lance mistakenly drinks an experimental formula that transforms him into a pigeon. Hindered in height, weight, and skill, Lance is forced to embrace Walter and all his non-violent gadgets.

While the villain plot is fairly standard, complete with Killian boasting a scarred face and robotic claw, the dynamic between Lance and Walter with their conflicting views of the world. Lance’s method is constantly stated as fighting fire with fire. This is, of course, a flawed outlook on the world when it comes to the bigger picture of resolving violent conflict but there’s still something important that feels warranted enough within the text for Walter to state the obvious; “Then everyone gets burned!” And so Lance and Walter attempt to accomplish what almost seems like the impossible for a spy film; saving the day without killing anyone.

Of course, the film is not without its kid-pleasing dosage of slapstick antics. There’s a sophistication even to these scenes that embrace more smarts in the assembly and science behind the scenarios. One common promo I’ve seen floating around for the film has been a scene where Lance, in pigeon form, pops out an egg. For those questioning how a male pigeon could accomplish such a feat, the film answers this question in a bit of eureka moment. Also worth noting is that the film has a lot of fun mentioning the more juvenile parts of science, as when Lance discovers pigeons have a cloaca. Good luck explaining this concept, parents!

Spies in Disguise don’t quite dig as deep as it could’ve into the concept of non-violence but it digs far deeper than most commercial animated productions would dare to tread. Though the film does kind of turn the thoughtfulness into more of a bombastic finale than insightful observation, I kept reminding myself this is a movie with a pigeon that does a surprisingly good job at offering at least the notion of postmodernism on the dated and troubling grander message of James Bond. At the very least, it makes a point that Bond is a jerk for treating someone as capable and gracious as Q as a mere nerd. At one point in the film, Lance sneers and remarks that Walter is such a millennial for pursuing such concepts of non-violence. As the film goes on, it makes the case that millennials actually do have a point and the means to build a better future rather than bigger bombs. Not exactly the kind of film I expected from a picture where a pigeon throws up a teabag.