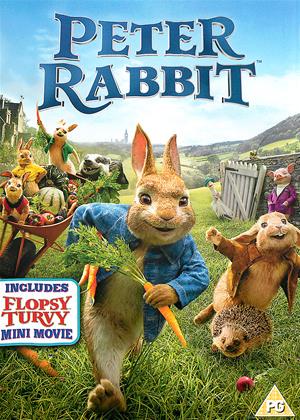 My husband, two children (7&11) and I watched Peter rabbit eagerly. I had heard good things and we were not disappointed. We love animated films anyway and this one is now firmly up there with our favourites. It had us laughing all the way through and appealed to a variety of ages. It's one of those movies I know we will watch again and again. I loved the soundtrack too, very current which made it edgy for a remake of such an old and traditional tale. Fantastic viewing and I can't wait to see it again.

Beatrix Potter will be turning in her grave. - Peter Rabbit review by HB

Very disappointed by this film from every angle. Mean spirited in its so called funny moments and a very predictable story regardless of how fast the action was. Product placement very obvious from the advertising of certain pop tunes to Harrods being promoted heavily. There was no suspense in the action, the romance featured had no credibility as the usually excellent Domnal Gleeson was miss cast, and I have seen better antics from the squirrels in my back garden. The trivialising of severe allergy to a food was down right immoral. I have a daughter who suffers from this and didn’t take her to see it in the cinema because of the advance publicity.

There was a total lack of charm and wit which I had hoped would be present in a Beatrix Potter story. So it’s a thumbs down from me.

Saw with 4 grand children, and they followed it all the way through. Some of the banter is aimed at an older audience, but the mad action went down well.

At end of the day, was no swearing, and plenty of funny moments to keep kids attention throughout. The Tom and Jerry violence is not much different, perhaps even less than, Home Alone...............

Wonder how much Harrods paid to be in this film? Why anyone would think it wise to update Peter Rabbit I’ve no idea. And what is the target audience? Hardly a children’s film.

How did this get made? - Peter Rabbit review by Casey

Is the movie telling people that it's okay to hurt rabbits if they annoy you?

First putting them in pies, then trying to drown them and then wanting to electrocute them and blow them up?

And then for the rabbits to trick Mr McGregor into putting his hands in bear traps, who wrote this and thought it was funny?

Granted nothing graphic is obviously shown but why was all this needed in a film about a beloved character?

This may seem an over reaction but this is suppose to be a family film and for some kids, this could leave an impression.

I gave an extra star only because the animation is really good.

This is nice, not brilliant as I'd hoped it would be. James Corden voice is an inspired choice for the lead.

Why the big fuss over the blackberry scene? Yes I understand about his allergy but IT IS A CARTOON. Oddly no one seemed to have a problem with people/rabbits being electrocuted or blown up! Only make sure they don't get pelted by a piece of fruit! I think we've got out priorities wrong here.

There was something missing in this movie and I'm not sure what it was. It certainly has humour on 2 levels which is always good. Worth a watch.

Dissappointing on so many levels! - Peter Rabbit review by CS

I was expecting a lot more from this film, from the quality of the trailers, I thought it looked like a good family movie. There are some really laugh out loud moments and the film is full of slapstick comedy, but of the variety where it's funny to see people get really badly hurt, not of the intelligent kind! It's like a live action version of Tom & Jerry, but in cartoons when the characters get hit by a hammer or blown up, it's not real, in real life people do get hurt and the human character gets hurt very badly by the antics of Roger Rabbit and his pals. It came as news to me that the other rabbits were all females, out of five rabbits, I thought two were girls, one possibly a gay character or at least very camp and two or three boys! Then there is the blatant advert for Harrods, which given current world politics and the fact that the Saudi Royal Family, who have been allegedly heavily implicated in Terrorism, own Harrods, I felt this was completely out of place and inappropriate, it felt like they had paid for the advertising as It's so prominent throughout the film. As is the blatant contemporary soundtrack, which almost takes over from the script and is clear designed again as an advert for the soundtrack! This could and should have been such a good film, but sadly it comes across as more like one big advert for products than a morality tale or even a decent family film!

When I first saw the trailer for Peter Rabbit, I expected something akin to Mouse Hunt for a picture built more for slapstick than a telling tale of the rabbit from Beatrix Potter's classic book. Boy, was I off. Sure, I expected the slapstick to be over the top, but I did not know to what degree. I expected the pop culture references, but not so lazily shoehorned. And I certainly didn't expect the allergy bullying scene that made a controversy loom over the film.

But what irks me most is Peter himself. As a CGI character voiced by James Corden, Peter is a psychopathic jerk. With both his mother and father dead, he is free to convince his sisters of Flopsy, Mopsy, and Cottontail to help him break into old McGregor's garden to steal some vegetables. Okay, there's no mother to scold him for his ways, but Peter can still learn a lesson if McGregor nearly catches him. Not so. Next door to McGregor is the lovely Bea (Rose Byrne), a woman far too forgiving of the rabbits with a boys-will-be-boys attitudes towards the issue of vegetable pilfering. She also lets the rabbits come in from the cold and feeds them. So what's the point in stealing from McGregor's garden. Because Peter is a jerk.

Not convinced? His insufferableness is further proven when McGreggor succumbs to a heart attack and dies in front of the rabbit. Peter's response: Party at McGregor's house! Yes, his reaction to watching an old man die is to celebrate and trash his place. The only thing worse is that the film slopilly tries to explain away McGregor's passing, that he led an unhealthy lifestyle and deserved to die. Charming. But there is another. McGregor's nephew (Domhnall Gleeson) is a shrill businessman that wants nothing more of his uncle's estate than to fix it up and sell it off to the highest buyer. That means Peter can no longer take his fill of McGregor's place. Even worse, the new McGregor takes an interest in Bea, as she now favors him more than the rabbits. Peter is enraged and sets his sights on killing another McGregor.

This is not an exagerration. Peter is not oblivious to his actions. He has a killed one McGreggor and he'll kill another to get his garden and his woman. Fine, he has pathos for having lost his mother and fears Bea is his last line of a parental figure that is being snatched away. All empathy for this plight evaporates once Peter mocks McGregor's blackberry allergy and proceeds to pelt him with the fruit. One blackberry becomes lodged in McGregor's throat and he nearly chokes to death if not for his EpiPen stabbed into his legs. How hilarious.

I've been told numerous times that I'm overreacting for being appalled by such a scene, that if I hate this I should denounce Looney Tunes as well. There's a world of difference. Looney Tunes firmly establishes that the violence will not outright kill the cartoon characters; bombs result in soot faces and weights result in flattened forms that can be blown back up to accurate size. Peter Rabbit establishes that death is real for the McGregor line and that the new McGregor could die from his allergies.

And then there's all overused cliches of every CGI animal movie; pointless dance numbers, pop culture song rotation, fart jokes, butt jokes, meandering gags, and lots more dancing. The film never works for any of this in the same way Peter never works for his food or to be charming. And I know it's a film meant for kids and that an adult father is not a target demographic for this farce. But past all its cute designs and smug winking at the camera, Peter Rabbit has a rotten core. If Paddington 2 was the sweetest tale of a CGI creature inhabiting a live-action world, Peter Rabbit is the exact opposite in every way.