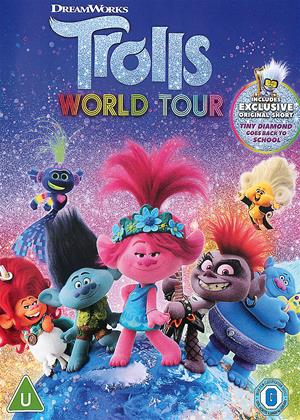 2016’s Trolls was such a ho-hum bit of animated entertainment that I honestly couldn’t recall what happened in the film for the longest time after having seen it. Returning to it once more in preparation for the sequel, I found the film so middle-of-the-road in its pop-fused message of acceptance and fighting against cultural norms as the Trolls strike back against the Troll-eating monsters of the Bergens. Thankfully, almost graciously, Trolls World Tour chucks out a lot of this lacking lore for something more creative, compelling, and offering a bit more variety a pastel fever dream.

World Tour doesn’t require any knowledge of the previous film to appreciate. In fact, the sequel tosses out a lot of elements of the previous picture to become something all its own. The Trolls of the last film, who are apparently the breed of Pop Trolls, are trying to adjust to their kingdom that doesn’t require strict hiding conditions. The newly appointed Queen Poppy is very much about leading her people with happiness and love while her best friend (and maybe boyfriend) Branch is unsure if she has what it really takes to be a leader. This is mostly because when Poppy hears tell of there being other Troll tribes of different genres of music, she’s more excited to unite them than fearful of why they split in the first place.

The Troll tribe that comes with the skepticism of trust is that of the Rock Trolls, desiring to dominate all other forms of music to become the dominant genre of the land. Led by the bitter and lonely Queen Barb, she roams throughout the fantasy regions to raid the land of various Trolls and steal their magical musical string that defines their genre. Once she has all of them, she can turn all Trolls into her rock zombies. Poppy believes she can bring her message of unity to Barb while Branch seems more cautious that he’d rather bring weapons and trust nobody on their journey to unite all Troll kind.

There’s far more creativity in the design of this sequel considering the variety of different musical Trolls. The likes country, funk, classical, and techno are all given their own unique world, where the techno trolls occupy an underwater paradise of dance parties while the funk trolls reside within a trippy starship of unorthodox design. There’s an extra spice to the picture when realizing that we’re not going to be stuck with pop music throughout. You’ll still be treated to a few covers that range from sufficient to staggering, but at least we’re not getting the same eye-strain of a Troll village where Easter seems to be an everyday holiday.

I smiled along with World Tour more than I did 2016’s Trolls but more for what the film represented than what was present. The idea of unity and bringing others together is nothing new for an animated picture, even within a film such as this that tries to throw a few twists into the mix that are highly telegraphed. That being said, the world of Trolls is unique enough to warrant this film’s return to the world of big-haired creatures, made all the more compelling by the various genres and how they clash. I especially enjoyed how the subgenres of K-Pop and Smooth Jazz don’t exactly have a place within the kingdoms and more or less become mercenaries. Wild stuff. Such assembly made me wish the film went even wilder with such a rock opera concept.

Trolls World Tour will no doubt please the kid audience who enjoys a good dance party with fantasy creatures and plenty of slapstick. Parents won’t be left too far in the cold considering the clever design and a handful of over-the-head bits. The film comes about as advertised with some hints of unique ideas along its candy-coated trail of music and energy.