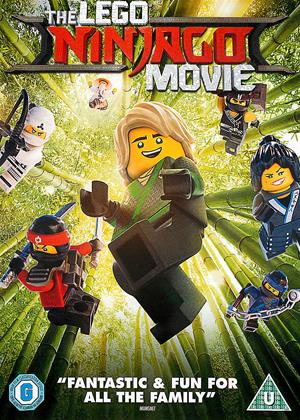 Reviews (1) of The Lego Ninjago Movie

Everything is awesome... except in Ninjago - The Lego Ninjago Movie review by EH

I’m a geek. I normally love these movies. And this one tries so hard to be smart and zippy and slick... but it’s just a mess in script and plot and setting and tone and pretty much every other way. The animation itself is superb as always, so at least it’s fun to look at.

It just feels so disjointed. The Jackie Chan live-action segments make no sense. Which is a shame because I love Jackie Chan. It tries to do the usual Lego humour but most of it feels quite laboured and it wears thin very quickly.

You always go into these movies knowing they’re going to be a bit off the wall, but this really has no particular purpose or strength as a movie, you’re never really invested in the characters or their motivations, it just feels like set-piece after set-piece with some rather obvious and repetitive gags sprinkled on top. The father-son relationship that really should be the backbone of the movie is just plain frustrating throughout.

However, my daughter loves it especially the L-loyd thing and the butt-dial scene. But us adults just have to sit this one out. Sad times.

The theatrical Lego movies have done a fine job crafting films that are fun, clever and have a genuine appeal to be more than just a commercial for the toys. Not this film. Ninjago, based off a particular line of Legos, seems stuck on a track of following the instructions to the letter for a Lego movie more focused on pushing the product than a message. Remember how in the first Lego movie featured a father that was so bent on keeping his Legos orderly that he glued them together? Here is a Lego universe created by someone who hasn’t gotten that message yet.

The Lego city of Ninjago appears as a futuristic Hong Kong, brimming with Asian design and robotic contraptions. The population is under constant threat from the evil Lord Garmadon (Justin Theroux), a four-armed demon armed with an army dressed in outfits of sharks and crabs that shoot actual sharks and crabs. The city has grown used to his attacks like the weather considering they are constantly saved by mysterious teenagers piloting giant robots. With their ninja skills, which are somehow important for piloting giant robots, they are led by the unsure teenager Lloyd (Dave Franco), the son of Garmadon that has concealed this secret from both the city and his dad. Maybe one day dad can finally open up to he’s not invading Ninjago or when Lloyd is firing missiles at him.

Eager to show off the fancy robots and big action scenes, the Ninjago movie blows its wad too early by throwing too much at the screen in the first act. Skipping over most of Lloyd’s home and school life, the story dives head first into all the craziness, which it turns out is in short supply. Most of that familiar flavor of self-aware comedy is present, but doesn’t feel as powerful for a superhero robot story.

There’s an ensemble for this hero group that never feels fully taken advantage of, considering the massively missed opportunity of having all the robots combine. We know one of them has a role model of an old female warrior, one of them can’t decide on their least favorite thing and one of them is a robot. You can’t expect much out of a superhero ensemble, but was it too much to ask for something more out of this group? The most hilarious thing heard from the robotic teen is him complaining that his mother speaks in 56k dial-up. He’s such a great concept for a robot pretending to be a teenager that he is criminally underused. Nothing about calling his dad a total 404 or his school as lame as Commodore? Even their leader, an old-fashioned martial arts grandpa voice by Jackie Chan, feels just as underwhelming with his cryptic blatherings about finding your true power.

The first act having used up everything fun, from the giant robot battles to the inclusion of a live-action cat, the second act focuses entirely on the father-son dynamic between Garmadon and Lloyd. This is where the film slows down to a crawl with characters the writers seem to have almost too much faith in. At this point, the film has gone on autopilot with its humor and storytelling. Garmadon teaches his son how to throw to the tune of a father-son bonding song that is played off by the characters as a mistake in music choice. Just because you make fun of an obvious trope doesn’t make it funny. The ninja team venture into the dark jungles so they can uncover some ultimate power that will turn them into the Planeteers of Captain Planet. Yeah, whatever.

With three directors and six writers, the Lego Ninjago Movie is a mess of Legos that are never built into anything great. No fun and original creations from one’s own mind. No crossover of other Lego universes. No childlike wonderment in the story, as it was apparently told by Jackie Chan. Also, the Jackie Chan bookends are confusing for being staged as him telling a story to some random kid who randomly strolled into his shop for no reason. The Lego movies are capable of so much more than this hollow template for fun. Please throw out the rule book next time and make some fresh and creative. You don’t HAVE to end every Lego movie with a dance number and encouraging song.