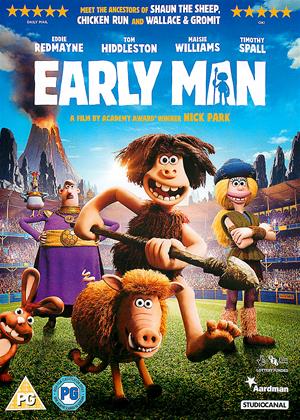 Disappointing - Early Man review by AM

Was expecting great things as previous films so good but this definitely missed the mark. Could do so much about early life but to focus on football - just didn't work for me.

With such a strong track record I expected a lot from this, but it's sadly rather lacking. The animation is as wonderful as you would expect, and there are some good jokes here and there. The problem lies with the plot, which can be summed up with one word - football. That's really all this movie is about, and the stone age setting is entirely superfluous and wasted. If you're not into football (I'm not), then there's little to hold the interest unfortunately.

Being a great fan of Aardman who brought us such classics as Wallace and Grommit, Shaun the Sheep, Creature Comforts etc, usually they produce very strong, funny and original films and shirt stories. However, apart from a blatant attempt at cashing in on the Football World Cup, what the point of this film was, is beyond me! 'Early Man' set in the Stone Age, with Romans, no Dinosaurs , Woolly Mammoths or Sabre Tooth Tigers, but a massive Mallard Duck, completely out of place. Not wanting to be a spoiler, but really there is no plot, because this film is entirely about a Football Match between Romans and Cavemen. If you're into Football (which I'm not), then you'll probably love it and find it funny, if you're not, then you'll probably find it a real bore and not funny at all, which I didn't either! I found this really boring to watch, this is probably the first dud that Aardman have produced and I can see it in the bargain bins very soon!

Sadly let down by this film after previously enjoying their other films. I would only recommend if you are a big football fan with limited imagination.

The plot, if that's what it is, loosely supposes the invention of football in pre-historic times. After that, I'm afraid it is all downhill. The kids said they could hear me snoring, even after they had left the room early on.

Gone is the clever edginess of Wallace and Gromit.

I guess it is the kind of film which is made by film-makers who are no longer hungry.

Spot on, even if you don't like football - Early Man review by RM

Really enjoyed this animation, full of gags with excellent characters, a great bit of timing being World cup year this film is full of good philosophy "You are a football team, they are great players but not a team", and the concept of fair play is shown really well. Good feel good film!

This film shows just why MERIT IS ALL and shoehorning female characters into films for pc diversity reasons never works.

It all starts well enough - and having dinosaurs and cavemen together is NOT a problem, because it's a story, not science documentary. Yes we KNOW humans and dinosaurs didn't live side by side BUT neither did T-Rex and dinosaurs like Stegosaurus - they were over 100 million years apart!

This film fails because it loses its focus which should be the story and instead tries to score pc feminist diversity points - from about the half way mark especially. I groaned when a female football player was introduced. Not needed at all. Neither are the token black characters, esp as cavemen tribes would have all been interrelated so all the same skin colour (except for slaves or traders).

This then turns into a football film as boring as Escape to Victory. I almost fell asleep before the end.

More educated people might like to read THE GIFT OF STONES by Jim Crace, a superb short novel which describes the bronze age tribe replacing a stone age one.

This is Aardman's worst ever film by a long chalk. Let's home they jettison the pc diversity worship for the next one, and get back to an all male Wallace and Gromit!

Fun but no Wallace and Gromit - Early Man review by PC

Aardman films are always worth a look and clearly lovingly made, this is no different. It takes a while to get going but once it does it have the usual mix of clever gags and slapstick.

Good but not great - Early Man review by HM

Better stuff form Aardvark usually, an over used plot about winning a football match, but some laugh out-loud moments. Kids will love it but adults may find it a bit hackneyed.

What a shame. All of the gentle subtlety, and understated humour of the original Nick Park films have been sacrificed to the brash formulae of the American market.