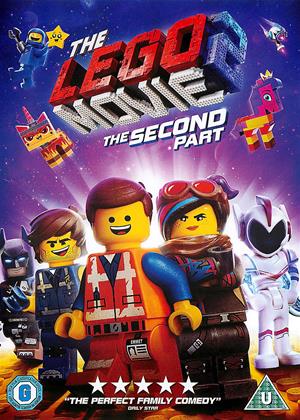 Rent other films like The Lego Movie 2: The Second Part

Reviews (2) of The Lego Movie 2: The Second Part

More of a cynical product than the first movie - The Lego Movie 2: The Second Part review by Dee

If you liked the first Lego movie, then you'll probably also like this, but it's a far more cynical affair.

As an adult I found a lot less to smile at and a lot more to cringe at in this second Lego movie.

The first movie might have been a stealth (movie long) advert for Lego, but it didn't feel like it while you were watching.

This one felt like a product placement mish-mash of awful puns and shoe-horned pop-culture references, and just less of a thing done for the joy of it and more a thing done because the last one made truckloads of money.

Its Lego ,whats not to like about Lego ? - The Lego Movie 2: The Second Part review by porky

Entertainingly Silly. Following on from part 1 that Ended with an invasion of Aliens .

Well things only get Worse ....or Better ,Depending on your Idea of Lego Play .

2014’s The LEGO Movie ended with an interesting cliffhanger; what happens when the younger, girly toys invade the world of LEGO? Terror strikes and it isn’t long before the yellow brick people soon find themselves fleeing into an apocalyptic wasteland. What follows is a tale of understanding and playing together that, while positive and wholesome, ultimately doesn’t use anything all that new to tell such a story.

The familiar character all return with new hurdles to conquer. Emmet (Chris Pratt) is far too chipper for the more dangerous setting of a Mad Max world where he ruins the mood of brooding and hardened behaviors. Wildstyle (Elizabeth Banks) takes comfort in the new atmosphere of dark and grit but has a part of her past yet to be revealed. Batman (Will Arnett) is still feeling lonely and bitter but may have a desire for more in his life. Their world is turned upside down when mysterious aliens kidnap nearly all the main LEGO characters, leaving Emmet to save the day all on his own, to become the man Wildstyle wishes he’d be.

Once the journey leads to space, the real reveal of all this in terms of live-action relation becomes all too clear with every clever pun. The many LEGO characters travel to the Systar System where the galactic overlord, Queen Watevra Wa-Nabi (Tiffany Haddish), lays out her plan that she assures is not evil at all. She wants to marry Batman in a grand ceremony where she promises every LEGO character will receive everything they ever wanted, a proposal Wildstyle doesn’t buy. Emmet is also more committed to the rescue when having a premonition about something called the Ar-mom-apocalypse which will banish everyone to the pit of Storage. It doesn’t take a genius to see where all this is headed, even with the addition of the mysterious cool-guy Rex that Emmet idolizes.

The film still finds enough fun within the familiar premise. The design of Watevra is particularly clever with her form never being a solid shape, a constant shifting of blocks into different figures and shapes. The songs are still just as unique and knowing enough to title the film’s catchy song as “Catchy Song,” complete with the lyrics about this song getting stuck in your head. But it’s this knowing nature that is merely doubled and rarely inspired to greater heights. A lot of the referential humor comes off the same as it did in the first film, this time plateauing to the level of a Saturday morning cartoon lightly laced with some bits of adult humor. Now that we’re aware of the live-action, the big twist of where this is all headed is not so surprising. Even with the rattling cage of adding in time travel to the LEGO story, which raises all sorts of odd questions about toy sentients doomed to a Toy Story style theory video series, the film merely winds itself tightly around the silly humor it has become so comfortable wielding. You know something is amiss when several of the cameo voices and LEGO have to be pointed out like a lame variety show.

While I wasn’t as impressed with the second outing of the LEGO movie, I can at least say it maintains a hold on the child audience and with a good message. What parent wouldn’t be proud to have an animated film that encourages brothers and sisters to play together with their toys and find something more inspired in their bouts of creativity? But when it comes to enjoying the story after the more inspired take of The LEGO Movie, the script trots too safely on the same path, hoping it won’t step on a LEGO brick that will annoy fans and push them back. I gotta admit though that the film does nail the horror of this aspect, where Maya Rudolph steps on LEGOs several times and compares the pain to childbirth.