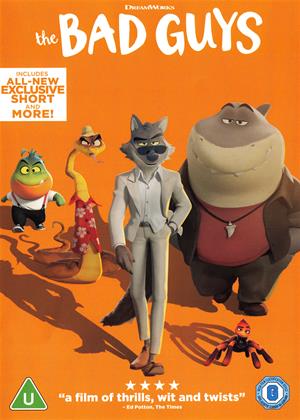 Reviews of The Bad Guys

Can the classically bad boys of children’s stories be the good guys? That’s the question that is posed within this animated film based on the graphic novels of the same name. A gang composed of anthropomorphic criminals (wolf, snake, tarantula, piranha, shark) believe that a life of crime is the only life they have. They have learned to live with being intimidating figures that rob banks and get into chases around the city with the cops. But are they only destined to be the bad guys?

That’s what their leader of Mr. Wolf (Sam Rockwell) once thought. His days are met with a casual comradery of his criminal pals as they have a coffee at a diner before ripping off the bank next door. Nobody stands in their way. The city is too terrified of such a crew. The crew includes Mr. Snake (Marc Maron), Mr. Piranha (Anthony Ramos), Mr. Shark (Craig Robinson), and Ms. Tarantula (Awkwafina). Each one of them represents their respective animal with respective skills. Snake is an expert at cracking safes while Tarantula is a master of internet hacking because, you know, the web pun. It is pretty funny that Shark is considered their master of disguises considering he sticks out as the largest member with the most eccentric of attitudes.

Wolf wants to prove that his crew has a good life but that notion is challenged by the unimpressed Governor Diane Foxington (Zazie Beetz), a fox. To fight back against this notion, he aims to swipe a golden statue at an award ceremony. What Wolf doesn’t count on is being stricken with a new sensation. After saving an old lady from toppling down a flight of stairs, he is told that he’s a good boy. This causes Wolf’s tail to wag and his priorities to change. So when his gang fails to swipe a statue, Wolf is able to appeal to the good nature of the city’s greatest philanthropist, Professor Rupert Marmalade IV (Richard Ayoade), a guinea pig. Being noted as a kind soul, Marmalade decides to teach the gang the ways of the good over the bad. But will it take?

The Dreamworks Animation team has certainly put a lot of great effort into making their latest animated feature look uniquely distinct. There’s clearly some heavy inspiration from the Ocean’s Eleven movies and even more so the look and feel of the Lupin The Third franchise. Lupin fans will be quick to note the similar suits, snappy action, the use of Fiats, and Lupin’s iconic swimming through the air hallmark. Take note of how the 3D animation has little touches of 2D in the details of the character fur, the smoke in the backgrounds, and the haze of the sunny settings. Even the human characters have their quirks, as with the well-built and overly-excited Police Chief Misty Loggins (Alex Borstein).

The message of the film is also perfectly communicated that even the youngest of audiences won’t miss what the picture is trying to say. The bad guys trying to reform into good guys rely more on the value you get from good deeds internally rather than something grander. Sure, good versus evil is a far more complicated topic with much to consider. But reducing all that to a simpler message of “don’t judge a book by its cover” is still a lesson worth learning. Living by stereotypes alone is no way to live and the film brilliantly challenges this notion.

The Bad Guys perhaps don’t go as hard as it could for such a picture but is still fun enough for the family. The characters are quirky, the heists are exciting, the animation is vibrantly stylish, and the general themes are woven without mixed messaging. It’s a pleasing animated film to watch with the family for the adult allure of heist movies and the childish love of jokes about butts.