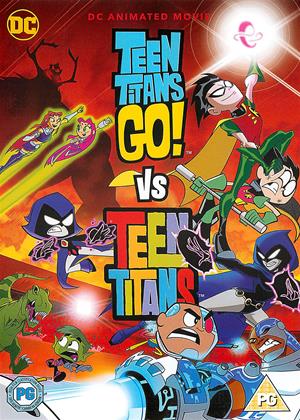 Synopsis:
It's a double-trouble alert when an average crime-fighting day in Jump City goes haywire. Robin, Cyborg and the rest of the 'Teen Titans Go!' members are kidnapped and find themselves unwilling combatants in an otherworldly face-off hosted by the maniacal manipulator the 'Master of Games!'. The Tournament of Titans pits the members of 'Teen Titans Go!' against none other than their much taller selves, the Teen Titans. With Raven from 'Teen Titans Go!' literally battling her own inner demons, this tournament may need more teamwork than either side is willing to tolerate to save the world…and all other worlds!
Directors:
Jeff Mednikow
Producers:
Jeff Mednikow
Voiced By:
Greg Cipes, Rhys Darby, Grey Griffin, Sean Maher, Scott Menville, Robert Morse, Khary Payton, Kevin Michael Richardson, Tara Strong, Hynden Walch, 'Weird Al' Yankovic
Writers:
Jeremy Adams, Marly Halpern-Graser
Studio:
Warner
Genres:
Action & Adventure, Anime & Animation, Children & Family

It was perhap out of necessity that such a crossover would be due for Teen Titans. When the Teen Titans animated series went off the air in the mid-2000s, there much heartfelt praise for the series that lasted five seasons, merging the grit of the comics with the giddiness of the exagerrated anime aesthetic. So when the more goofy and rollicking parody of Teen Titans Go debuted, there was much harsh criticism from the devout. Even though Teen Titans Go has become more its own thing and become a firm main-stay of Cartoon Network, fans still remained bitter. Given that DC’s television productions were leaning heavy into crossovers, along with TTG willing to parody all manner of DC animated history, they could somewhat throw the fans a bone with this special.

The tease began with Teen Titans Go To The Movies, where in the mid-credit Easter egg the original, more anatomically correct Teen Titans are present. Now the egg has hatched with an event film (though not theatrical) that naturally involves a multiverse to explain the crossing designs and tones. It’s a tale typical of such specials, better built for merging more than melding into a solid story. The 2013 Titans are captured by the Master of Games and forced to defend their galaxy by doing battle with other galaxies. Thus the 2003 Titans are given the same option and pitted against the goofier version of themselves.

There is at least some attempt to reason for things getting a little more series with the multiverse madness. The evil witch turned hero Raven learns from her demonic father Trigon that she is slowly losing her heroics with age, soon to blossom into a fully fledged demon rather than half of one. Raven initially rejects having this side of her taken away, choosing to embrace the darkness with her good side so that they may perhaps live in harmony. On the nose, sure, but it’s not as though Teen Titans Go ever set such high narrative ambitions in its rambling antics of waffles, kittens and farts. Just too keep things on a silly note, part of the narrative involves Santa Claus as a key player. Sounds about right.

For merging styles, the special looks surprisingly vibrant and colorful for still remaining within its TV budget limitations. The Titans remain about as comical as ever, always finding just the right moment to break the fourth wall and break out into random eccentricies, while taking big aim at the aspects of DC that could use a good ribbing. While not as robust a satirical jab as Teen Titans Go To The Movies, there’s a handful of hearty laughs to be had in its assembly.

But if I’m being honest, the real draw within such a special is for the many iterations of the Titans taken on for this project. The climax naturally involves multiple versions of the Titans, some manufactured for this special (1980s punk Titans) and others retro based on past designs (anyone remember the Filmation Titans of the 1960s?). From this angle, the special is more exciting from a visual standpoint of how much wild artistic aspects can be spun into such a frenetic display. And as a long-time DC Comics fan, my smile kept for how knowing and referencial the special could be.

In case the many 2003 Titans fan who consider Go to be a blasphemous bastardization, I can’t exactly say there’s a lot present here to sway your sinning of the silly. Teen Titans Go vs. Teen Titans is mostly for the fans in terms of keeping its parodic nature a constant throughout, only amping it up for more visual exploration than vast tonal shifts. It’s a bit brainless for sure but no less amusing than the show ever was.