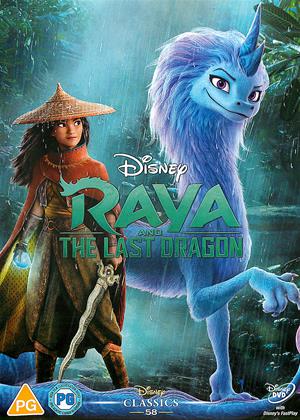 Reviews (2) of Raya and the Last Dragon

A badly miss cast film with an awfully dull dragon. This latest feature claiming the title of Disney’s 58th classic is far from classic and in most cases very forgettable. From a badly cast dragon to the lack of whit usually found in this type of feature. This film feels like it fails to embrace many traits that make Disney films shine. The overall story feels like a rejected script from a Kung fu panda film.

Disney - Raya and the Last Dragon review by YL

Disney at it's best, even though I'm old, I shall never be too old to watch Disney. Loved this film.

It’s refreshing to know that even though the Walt Disney Animation Studio has not become complacent enough to be good enough as Pixar. The studio, known more for their princess formula in Frozen and the trope-subversion humor of Wreck-It Ralph, takes a chance with Raya and the Last Dragon not fitting the common archetypical animated film. No songs and no romantic subplots. This is very much a fantasy adventure that can contend with the likes of Avatar: The Last Airbender by being both earnest, exciting, tragic, and fun.

The setting is that of a magical land where humans and dragons once lived in harmony. That harmony was disrupted by a mysterious dark force of pulsating magic that transformed everyone it touched into stone. The only way to stop this evil was with the sacrifice of the dragons, using their last bit of magic to hold off such dark forces. With the only powerful dragon magic remaining confined to a single orb, humanity fights for acquiring such power, diving the people of the land into warring tribes.

Given that the dragons disappeared 500 years ago, Raya (Kelly Marie Tran) of the Heart tribe has grown up only knowing of conflict. She’s been training in various activities of martial arts and weapon mastery to be prepared for any tribe that dare threaten her own. Her father (Daniel Dae Kim), however, is hoping those days will be behind them and that a non-violent resolution can be reached with mere trust. The Fang tribe, however, is not keen to share and deceive their way into tearing the world further apart.

More years pass and Raya now finds herself forced into the role of wandering warrior to seek the last remaining dragon that could save the world. That dragon is Sisu (Awkwafina), the apparent runt of the dragons as she mentions herself. Thankfully, with each shard of the dragon gem acquired, she grows a little stronger with a bit more magic. Sisu, however, is more trusting in humanity than Raya. This leads to the two learning more about themselves and the world around them, though it’s ultimately about Raya learning to restore her faith in others that she thought had died with her father.

The fantasy world of Kumandra is wonderfully realized, each tribe occupying a different patch of land with its own weather, color, culture, and allure. From the decayed ruins of Spine to the decadent kingdom of Fang, every stop on Raya’s journey to unite a magical gem finds her in such amazing worlds. More impressive is how each world plays a part in shaping Raya’s worldview, picking up an ally from each. Whether it’s the lost warrior of Tong (Benedict Wong) or a baby that has resorted to crime (yes, really), each person she picks up has suffered a loss similar to that of Raya. Everybody, including Sisu, has lost something and everybody has something to gain from coming together to restore their world.

Raya and the Last Dragon is a riskier venture for Disney considering its balancing act of exciting fantasy action and wrapping in a strong moral message. It’s a film that’s loaded with action yet is surprisingly free of death for a film that’s all about sacrifice and loss. The message becomes clear from the first act but Raya trying to learn it becomes all the tougher to embrace when she finds herself riddled with tragedy and rage. It’s a rare change of pace for a Disney film that feels like a genuine fantasy adventure of great world-building and exciting sequences rather than just trying to be a Disney animation trying to replicate that genre for a kid audience. As with the best of Disney films, this movie doesn’t talk down to its audience and delivers an enthralling animated epic that will please far more than the wee ones. It’s destined to be highly regarded by such kids, aging like a fine wine by the time they’re old enough to drink wine.