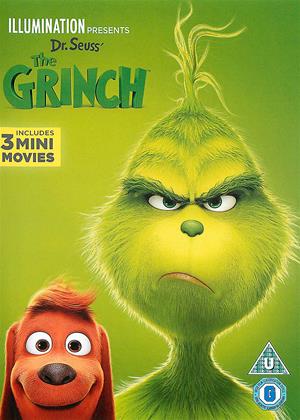 Reviews (1) of The Grinch

Ok but very average and not a patch on the Jim Carrey version! - The Grinch review by CS

At the beginning I found this quite dull and felt it dragged out a bit, but it does get better as you go along. I'm not quite sure the reason for giving us yet another version of a Dr.Seuss classic, when they've already been overdone. In essence The Grinch is a reworking of the Dicken's classic 'Scrooge'. Excessively heavy on the girl power, which could have been pulled back a bit, and cheesy to say the least with the message of love. Which is quite ironic given that it was the Who's and their bad treatment of the Grinch which made him this way in the first place! The ending has got a nice feel good factor to it and I'm sure the kids will love this, but I found it a bit too cheesy to my taste and personally I felt the 2000 version starring Jim Carrey to be far superior! One of the problems Illumination and all the other Animation Studios seem to have is that they use the same templates for all their films, rather than new ones, so you see the same characters rehashed constantly and this film is no exception in that respect, the downside is that you're constantly reminded of characters in other movies, rather than bringing something fresh and new to the film! This film brings nothing new to the story, it's simply yet another animated movie for the time period and very little more in effect!

The Grinch (aka Dr. Seuss' The Grinch) review by Mark McPherson - Cinema Paradiso

After 2003’s live-action rendition of The Cat in the Hat, the Dr. Suess estate said enough and forbid any future live-action adaptations of the classic kids books of rhyming tales. This didn’t mean the end of theatrical adaptations as animation wasn’t out of the realm of possibilities. After all, such stories have worked exceptionally well in TV specials that have become legendary. But the theatrical adaptations that followed of Horton Hears a Who and The Lorax added very little to these short stories in a longer format. The Grinch is unfortunately another film to add to that pile.

The Illumination Studio has taken on a hefty title. How The Grinch Stole Christmas has been a holiday staple of television for decades with classic music and brilliant Chuck Jones animation. But let’s be fair and not compare on that level. Thankfully, this version does try a FEW interesting aspects to beef up that running time. The Grinch (Benedict Cumberbatch) is still a Christmas-hating Scrooge but has more of an attachment to the Whoville he resides over in his mountain lair. He had a terrible childhood where he felt like he had nothing come the holiday season, giving him reason enough to despise when the snow falls and the lights go up on houses. He still goes down to Whoville because, hey, even a hermit needs groceries, I suppose. Can’t be much to eat for a lazy layabout up there. This aspect does allow for some decently silly bits of him acting like a jerk to all he strolls past on his brief visit.

Meanwhile, we have Cindy Lou, the cute and plucky little girl who is far more than just a face of innocence. She resides with her single mom struggling to raise her and baby twins. She wants to do the right thing for her struggling mother and believes Santa may hold a key to helping out. Of course, she’ll have an encounter when The Grinch puts his anti-Christmas plan into motion and their meeting carries a more unique emotional weight. Then again, it’d have to. At 90 minutes, I guess you do need a little more than Christmas songs to make such a beast’s heart go three sizes one holiday.

Illumination puts their usual animation formula to work once more on this material. There’s plenty of slapstick where the unamused grumps delights in spreading inconvience and finds himself in all manner of slapstick. There’s lots of dancing and music, including one somewhat expected sequence of Grinch excercising in tight pink shorts with wording on the butt, which will of course jutt outward multiple times. There’s a few gross-out gags, some food funnies, and lots more slapstick. Oh, and there must naturally be some cute kids with doe eyes and whimically childish personalities.

The new Grinch is fairly harmless from the same studio as Despicable Me, fitting the bill for that same audience as well. But it also doesn’t add anything noteworthy to the story, merely presenting the same characters and morals with a more modern coat of silliness seen time and time again. I can really only see recommending this for the kids who feel that Chuck Jones’ classic TV special is too dated. But considering the special still runs on television every Christmas, I doubt that’s the case. I also doubt you’ll ever see this version become just as revered.