Rent How to Train Your Dragon: The Hidden World (2019) 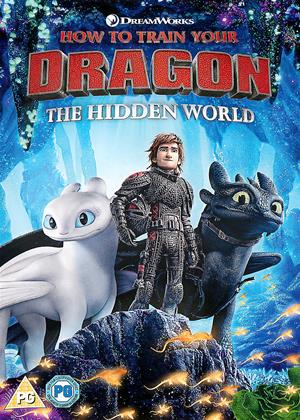 Synopsis:
A surprising tale about growing up, finding the courage to face the unknown...and how nothing can ever train you to let go. What began as an unlikely friendship between an adolescent Viking and a fearsome Night Fury dragon has become an epic trilogy spanning their lives. When the sudden appearance of a female Light Fury coincides with the darkest threat their village has ever faced, Hiccup and Toothless must journey to a hidden world thought only to exist in myth. In this last chapter, Hiccup and Toothless will finally discover their true destinies, and dragon and rider will fight together to protect everything they've grown to treasure.
Directors:
Dean DeBlois
Producers:
Bonnie Arnold, Bradford Lewis
Voiced By:
Jay Baruchel, America Ferrera, F. Murray Abraham, Cate Blanchett, Gerard Butler, Craig Ferguson, Jonah Hill, Christopher Mintz-Plasse, Kristen Wiig, Kit Harington, Justin Rupple, Robin Atkin Downes, Kieron Elliott, Julia Emelin, Gideon Emery, Ashley Jensen, AJ Kane, Ólafur Darri Ólafsson, James Sie, David Tennant
Writers:
Dean DeBlois, Cressida Cowell
Aka:
How To Train Your Dragon 3
Studio:
Universal Pictures
Genres:
Anime & Animation, Children & Family

Rent other films like How to Train Your Dragon: The Hidden World

Reviews (5) of How to Train Your Dragon: The Hidden World

Yawnsome, cliched and completely unoriginal! - How to Train Your Dragon: The Hidden World review by CS

I absolutely loved the first two films and the TV series was quite good too, although it did start to get a bit samey over time. This new film in the franchise brings us an all grown up version of the characters and rather disappointingly only concentrates on five main characters, that's Hiccup and his Girlfriend, Toothless and his girlfriend and the bad guy. All the rest of the cast are simply side characters used for fill in and don't really play any solid part in the film at all, it's like they are simply there as scenery to fill in the background. I personally found it quite nauseating how this film is literally all about sexual relationships between Hiccup and his girlfriend and Toothless and his new found girlfriend and (spoiler alert) surprise surprise they even all have kids at the end! The bad guy is equally irritating as he is simply a blend of the vampire from Transylvania and the chap from Despicable Me, even down to the voice! It seems that nowadays animation studios have a standard set of blanks that they use, which is why so many cartoon films nowadays seem to have the same or very similar characters in them and even the voiceovers sound the same and that's what happens in this film too. So it's less of a new film and more like a collage of everything else that has gone before. The storyline is so unoriginal and banal, even taking in elements of Avatar, that I found it quite hard to keep awake and personally found this film utterly boring and a waste of time!

Great - How to Train Your Dragon: The Hidden World review by JL

A poignant conclusion, if oddly conventional - How to Train Your Dragon: The Hidden World review by Christopher Chiu-Tabet

It’s a beautiful ending, one that left me almost on the verge of tears — it’s also a strikingly conventional one. The first How to Train Your Dragon was about an outcast whose capacity for invention, and to think outside the box, changed the world: it was the story of a boy whose inability to be like his warmongering father (who was literally called Stoick) helps bring about a fantasy land where humans and dragons live in harmony. In the second film, Hiccup discovers he inherited his Bohemian side from his mother, who has been living a rustic existence all this time with dragons. The third and final film, on the other hand, is about growing up, and putting away childish things. It’s an insightful message for the film’s younger audience about the inevitability of change when you grow older, but it didn’t ring true for this millennial fan.

Just about perfect - How to Train Your Dragon: The Hidden World review by Champ

The loved the first "How to Tame your Dragon" film beyond words, partly because it was so funny, kind, beautiful and charming, and partly because when it came out my step-daughter was the perfect age for it, and she loved it too, so we watched it many times together on the sofa.

Now she's about to go to university, but the third and (very obviously) last film of the three brought back everything that was special about the first one, and brought all those memories of shared enjoyment watching on the sofa flooding back. Consequently, the emotional content of this film, which is significant, chimed in with my personal emotional life, to the degree that I've never been moved as much by an animated feature.

This film is beautifully realised, beautifully scripted, beautifully played by the voice actors, and is just altogether wonderful. I cannot recommend it highly enough. Now pass me another tissue, please :-)

Kids love it - How to Train Your Dragon: The Hidden World review by NC

More of the same, but for the kids is ideal. The colours and lights and the dragons seems to work for them for sure.

The trilogy closer for How to Train Your Dragon comes in for a landing so stumbling they had to give it the generic sequel title of The Hidden World. But, wait, wasn’t there already a hidden world of dragons? Didn’t we already deal with dragon trappers before? One could question these aspects but perhaps that’s why this story tries to weave in so many characters, arcs, and visual flair that by the end of the film I was more exhausted for all the emotions it wanted to muster rather than how they were presented.

Hiccup has certainly come a long way from the first film. Once he was a shrimpy blacksmith assistant. Now he’s the leader of his village of Burke, charging into battle dragon armor that makes him look like the ultimate warrior of an RPG, boasting a knight-style helmet, dragon wings to glide upon and a sword of flames. Running his kingdom isn’t easy, especially since he’s built it as a haven for rescued dragons to live. One wonders how such a small island could support what must be hundreds of dragons milling about.

Hiccup won’t relocate them, however, until the village is under attack from a new trapper and killer of dragons. This time the sinister human is Grimmel, a skinny and white-haired villain voiced by F. Murray Abraham. He doesn’t have much of a drive to enslave and kill all dragons, merely mentioning that’s just the way he was raised. He killed one, dug it, and decided to kill them all. He also works for an invading armada of ships but they’re so doltish and uninteresting I don’t think we even mention their names or clan, relegated to being forgettable fodder for the grand showdown. Grimmel’s whole deal is that he wants to kill another Night Fury and Hiccup’s best dragon pal Toothless just happens to be one of rare ones still in existence.

It sounds like Toothless should hightail it out of there but not before he discovers a white, female Night Fury. Awkward dances and displays of romance follow, going on for as long as the cuteness of dragons mimicking the behaviors of cats and bats can be funny. And, boy, does it wear thin fast. And then Hiccup must also get married but since there’s little time to develop that romance between him and Astrid, their wedding conclusion feels more obligatory than organic. Mind you, all of this is on top of Hiccup’s mother being courted, Tuffnut growing a beard, and Fishlegs taking care of a baby dragon.

All of this just makes the film feel like busy work to excuse its repurposing and doubling of the previous film. Yes, the animation is still stellar and features plenty of gorgeous locations, from the neon underground world of dragons to the towering towers of Burke. The flying sequences of dragons soaring and shooting fire also look good but there’s a severe lacking in those epic moments that made the first two films so notable. There’s no time for that when the film not only wants to bring the tale of Hiccup and Toothless to a tender end but carry it further in an elongated epilogue that honestly removes a lot of the impact of the climax.

The central theme of How to Train Your Dragon: The Hidden World seems to fluctuate between trusting in others, embracing the future, and learning to let go. But in the film’s jumbled bouncing between all these stories and messages, the trilogy closer comes crashing in with too much tightly back into the film. By the time the credits roll and we’re treated to a montage of Hiccup and Toothless, I felt as though a proper goodbye wasn’t said in all the rush to resolve so much with a hurried bow. Perhaps the saga will continue in an animated series. There’s at least a full season worth of episodes in this one film.