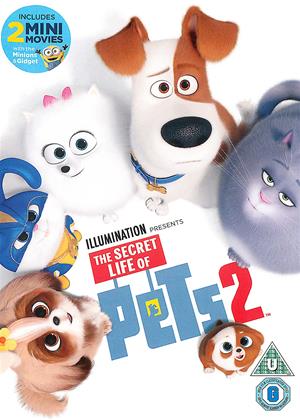 Rent other films like The Secret Life of Pets 2

Reviews (2) of The Secret Life of Pets 2

Pets more intelligent than owners? - The Secret Life of Pets 2 review by NC

Once again a kids cartoon with more imagination and clever dialogue than most adult films. De Caprio et al eat your hearts out........but that prob in their next film?

Animation is getting so good now , paint missing off railings, weeds growing in odd natural places etc. Mass of light and colour raises the spirits on a bleak day.

The story branches out into three separate adventures taking place at the same time. Max Tiny Dog gets "coned", has to cope with a new baby boy his owner gave birth to, and goes on holiday at a farm where he meets a dog with dignity called Rooster, voiced by Harrison Ford. Snowball wants to be a Super Hero Bunny, rescuing a timid tiger cub from a cruel circus owner, resembling the dark one from Mad Magazine's 'Spy-vs-Spy' comic strip, who has a pack of wolves. Gidget learns how to be a cat to retreive Max's prized Bumble Bee squeaky ball from a hoard of other cats, owned by a deaf but cool Granny. All three adventures culminate in an exciting chase on a train, which I would have liked to see go on for a bit longer.

After 2016’s supremely underwhelming The Secret Life of Pets, it became clear that the rising Illumination Studios had more skill in their goofy animation than any strong storytelling. This was all but confirmed by their second picture of that year, Sing, which seemed to find a means of removing the middle man from the song-and-dance number of animated pictures. The Secret Life of Pets 2 continues to prove this theory that the studio is really only in it for the gags, never finding a story present of pets that don’t come off as little more than a cheesy lattice.

The story finds new stuff for the characters to do but so little of it resonates when it all feels like a diced-up dish of TV episodes. The dogs Max and Duke have learned to get along with their New York owner but new developments come upon their family. The perky Katie, their owner, soon finds herself smitten with a man she meets on the street. That meeting turns into a boyfriend relationship. That boyfriend relationship turns into a marriage. That marriage soon turns into a child. Here’s the thing about that: we skim through so many of these developments that could make for a great story but they resolve too quickly. The pensive Max is unsure of Katie’s new man. That fear is alleviated quickly. He also fears the new baby being abusive. Skip ahead to the kid being of preschool age and Max is fine. So...what’s the drama here?

The bigger issue is that Max is too clingy, looking upon himself as a parent that has to protect Liam, Katie’s son. But is this really an issue? Liam is never once shown to be in danger or in need of having to skin his knees to learn all that much. You wouldn’t want to make the story too dangerous for the younger crowd. Katie and the family soon take a trip to their family farm and here is where Max meets the stern dog Rooster, perfectly voiced by a grumpy Harrison Ford. Rooster believes in a more masculine outlook on life, that one should learn by example. His example; chew through an electrical cord once, you won’t do it again.

But Max won’t have a lot of time to learn this as a more chaotic series of asides mount at home. Gidget, the upper class and constantly perky Shih Tzu, is tasked with looking after Max’s favorite toy and must later receive lessons in being a cat. Snowball, the cocky white rabbit antagonist of the previous picture, now believes himself to be a superhero thanks to the outfit of his kid master. This leads him into thinking he’s the right bunny for the job of rescuing a tiger from the circus and its evil owner. The evil owner, Sergei, is your stereotypical bad guy with a dark cloak and long mustache. So, yeah, the ultimate climax of such a picture is not about Max learning how to be a better dog but about freeing a tiger from a sinister circus. It’s a story more in line with a forgettable Saturday morning cartoon than a film.

Aside from a stellar voice cast and a few funny visual gags, The Secret Life of Pets 2 feels about as empty as the previous picture. It maintains the formula that Illumination has maintained throughout its pictures, that the goofiness trumps writing. Instead of finding a meaningful story, the film only finds funny stuff to do with pets. Compare that to the likes of Pixar’s Toy Story saga which found an intriguing tale to tell with the toy aspect and Pets just seems bereft of ideas past cute and gross stuff to pull with dogs and cats. Somehow I believe there’s more of a story one can tell with apartment dwelling pets than how a dishwasher can be used as a spa and how cats indulge in eating poop. Surely there is more.