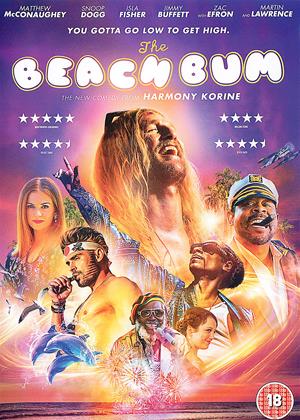 Reviews of The Beach Bum

Matthew McConaughey has such ease within his drawl voice that he seems to have the power to always make anything he says feel like a mosey to the next scene. The Beach Bum is the actor in his most chill form. He strolls around within a role he completely owns that is capable of great humor and sadness, so carefree within his drifting in his strange journey of an enigma of a party person everyone knows but few can fully connect with. He’s that one fun guy everybody loves to have at a party but that nobody truly knows. Perhaps even he doesn’t.

McConaughey plays Moondog, an aged party animal that loves to lavish in nomadic and celebratory lifestyle. He’s getting older and has a wife and grown-up daughter but still staggers around beaches and parties just trying to have a good time. Most of the time he’s called upon for events to give speeches that are sometimes heartfelt but most often surreal and cerebral. Most people like him despite being so stuck in his freewheeling lifestyle. His daughter, Heather, is happy to have him at her wedding, even proud that he calls out her husband as being boring, but will also grow frustrated when trying to deal with his bad behavior. He sets a house on fire, Heather berates him and he merely smirks while muttering “don’t be such a Republican.”

It’d be easy to hate someone like Moondog as a leftover of a 90s drifter who never quite drifted away. He speaks with a casual bluntness/vulgarity, steals stuff, breaks stuff, gets high, gets drunk, and sets his own money on fire. But there’s a certain charm to his lack of sophistication past some semi-spiritual belief in just enjoying the ride. He’s not a big capitalist but will gladly open up to his publicist about writing books and indulging him on his philosophies. The publicist also listens because, well, he’s just gotta know.

Director Harmony Korine turns in a very surprising film considering how much fun the film has in its stoner haze. There’s are many brilliantly hilarious sequences where Moondog hangs with Snoop Dogg on his boat in women’s clothing and later makes a mad-dash away from the police while hauling a truck’s load of weed. Later, he’ll hang with Martin Lawrence playing a dolphin cruise captain with a less-than-stellar record with tourists that he ends up encountering more sharks than dolphins. There are quite a few surprises given how Korine’s pictures usually meander around its themes. Moondog’s adventures are so strange and absurd that I can’t help but enjoy the ride he takes us on.

The Beach Bum was a film I didn’t expect to get so engrossed within its easy-going mindset of stumbling around the beach and finding stuff to do. Matthew McConaughey gives the film a certain reality as a believable version of a man who can ramble on forever and probably will. There’s never too much lingering on the Jimmy Buffet vibe considering Moondog will find himself everywhere from correctional facilities where he digs Christian rock to weddings where he seems both the life of the party and the quiet guest. There’s just something about McConaughey in such a goofy getup that is more than enough to make me smile at which weird escapade he’ll get into next, be it bumming beers off the street or lighting his boat on fire.