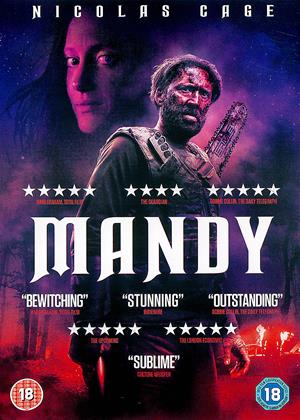 Nicolas Cage turned up to 11 in this psychedelic revenge movie about a couple living 'off the grid' who encounter some nasties in the form of a religious cult and their 'helpers'. Things ain't gonna end well. The dreamlike quality of the film lends it character and Cage does a great line in being himself. Fun enough but not one of the better thriller/horrors around.

We gave this 10 minutes and bailed. The dark colours and mumbling were awful.I always wonder if the actors knew how dreadful a film would be hen finished.

My advice would be to not waste your time with this one, its incomprehensible nonsense that i only watched to the end to see if it had some redeemable message ..... it didn't.

Actually thought Nicholas Cage did better in this rubbishy film than he has in other recent efforts. I would suggest, however, that he should choose his films more carefully in future! The film itself is dark, with little to engage your interest or provide any memorable moments.

Cage is as charismatic as an actor can get. He lifts a movie, like Bad Lieutenant. But there has to be a decent story to lift. This is a 70's slasher nonsense of B movie credibility. Badly edited, clumsy script. Cage likes an eccentric storyline, which enables him to over act or bring character to the role, make your own mind up. This is amateurish nonsense. No need for the RSPB to get involved in identifying this bird; it's a Turkey!

Just boring from the off - Mandy review by Old Devonian

Don't know how I was enticed into renting this. Slow, dull, couldn't care less about the characters. gave it 20 minutes and stopped

Cannot describe just how awful and bizzare, in an embarrassing way, this film is. The whole concept was pathetic and it must have taken a lot of effort to come up with such a load of drivel. The acting, the graphics and the script are all laughable.

Why? - Mandy review by PM

I've read critics about this movie, and they said it was great, and best acting of NC.

Why did they say it is a good movie? Why is it a good acting? Why did its makers think this was a story they had to show? Why am I watching this ...?

not often do i not watch films to the end but i felt wasted 30 mins on this 'film' imo it .offered little plot, poor charectisation and overall nothing that pointed to any hope of the likelyhood any form of entertainment . i can see the point of experimental film making. madelines madeline being the last 'main stream' one i thoroughly enjoyed . Mandy 4 me was just pretentious indulgent dribble

Gruesome but soo badly lit you cant actually see how Grim it really is .

Entertaining ,Dark and Twisted. if you can bare to sit watching it through a state like fighting your way through Marshmallow .

Slightly Irritating ,but worth the struggle if you can bare it .

The only way to out-crazy Nicolas Cage is to place him in a film even crazier than he is. Mandy presents him in by far the creepiest, trippiest, and most psychologically perplexing of horror films. And for a film that features him wielding an over-the-top sword and watching a cheddar goblin on television, it manages to be one of the strongest of Cage at his best in a clever, violent, and kaleidoscopic nightmare.

Cage plays Red Miller, a logger working in the woods of the Shadow Mountains in 1983. When the day is done, he retreats to his nearby cabin home where his artist girlfriend Mandy (Andrea Riseborough) is waiting for him. They have quiet evenings at home, snuggling together and talking about the fantasies that Mandy finds herself getting lost in through her art she paints and the novels she reads. Dinners are spent in front of the television, watching horror films they find most fascinating. Both have reformed themselves from troubled pasts.

Their distant life is shattered when a hippie cult, Children of the New Dawn, comes to town and targets the couple. Their creepy leader, Jeremiah Sand, demands the beautiful Mandy be brought before him, bending the woman to his whim the help of demonic bike riders and the most potent of drugs. But even when under the influence, Mandy doesn’t buy Sand’s “God told me to have female slaves” babble, especially when he tries to seduce her while naked with a shriveled penis. Red won’t take their crap either, even after he has been gagged with barbed wire, stabbed in the gut, and left for dead. After seeing what they’ve done to Mandy, he goes on a brutal and bloody road of revenge.

To merely call Mandy crazy from this point onward seems not only understated but insulting. It pursues down a route that could be considered random, what with Cage’s plan to craft a giant sword and the juxtaposition of the Cheddar Goblin on television. But it’s made very clear from the first few scenes that a horror such as this is aiming to be anything but lucid. The film slowly wraps you in its cozy cabin setting before coiling its colorful tendrils of terror around the mind. More and more disorienting the film becomes over time, from the animated dreams Red has of Mandy to the landscape that seems to transform into the cover of an out-there sci-fi/horror novel.

But the film thankfully never goes too far off the rails when it comes to its story, allowing the visuals to be the most wild and experimental of the film, far out-crazying Cage himself. Notice how with every dream, every kill, every trip down the road, the world grows starker and stranger. Harsh colors bathe the film in an endless fog of red and purple. Scenes of great horror are held for long and sometimes quiet moments of discomfort. The final showdown of Red versus Jeremiah is one that is certainly gruesome but also disturbingly weaved with light dipping in and out as the realizations of power shift and the terror takes an unsettling turn.

Mandy manages to avoid being yet another pitfall of a 1980s based horror and goes for the throat of the most frightening, stylish, and oddly compelling. A lesser film would have taken too much glee in the demonic biker gang of spiked armor or the odd placement of the Cheddar Goblin. But Mandy is aware enough to how much to use of everything, letting the cinematography take the reigns and twist our perceptions of the world where Red has his life tinted in blood, demons, swords, and cults fit for carving in a hellish world that turns more surreal with each scene. And how could you not love Cheddar Goblin!