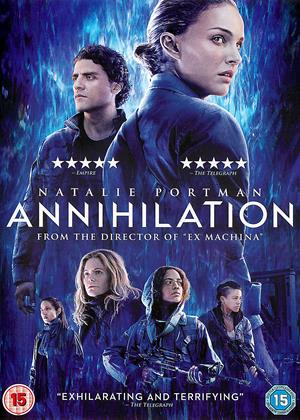 An interesting sci-fi idea takes too long to get to the point and, when it does, lacks drama. After a soporific half-hour, Natalie Portman and her team of sister scientists venture beyond a shimmering boundary into a mysterious zone that’s expanding to take over the world. Unnecessary intercutting between present and past slows the drama down even further. There are snatches of action, in which the scientists (who have now unbelievably become action women) shoot mutating creatures, then the sisters return to swapping bonding stories.

But then… out of the blue comes a spellbinding climax, where everything makes sense, where talk gives way to imaginative visuals and there’s suddenly a perfect electronic score with the best soundscape since Gravity. It shows what the film could have been. If only. Worth watching for that finale, though.

Huge build up that amounts to nothing. - Annihilation review by KT

Cinema Paradiso's own reviews calls this a "near-masterpiece". They must be talking about another film.

Film starts off shaky with the cast, then moves to annoying which sorts of help as at this point you're thinking some of the characters deserved to be killed off anyway.

Without spoiling the films plot details for those who are interested, I'll just say it's a huge disappointment, then again Natalie Portman and Sci-Fi just do not mix, just look at the weakest Star Wars films.

If someone was to fast-farward to the end scene of this film I'm sure most people will agree it's just plain stupid and disappointing.

If you avoid 1 Sci Fi film avoid this one.

It's only saving grace is that it is SO slow you can fast forward through major chunks and not miss a thing.

I love Natalie Portman. I would watch a film of her reading a menu but totally miscast and let down by a horror of a script and plot but I hesitate to use that word.

I tried reading the book but gave up on it. Despite that the premise was sufficiently intriguing I thought I should give it a chance as a film.

I at least managed to make it to the end this time, but take it from me it's not really worth the slog. The film looks great but that is about it , having to come up with a plot yourself because the filmmakers didn't doesn't make a movie profound it just makes it pointless.

It's all long moments of people who don't know anything interspersed with science-babble that makes the nonsense that accompanies cosmetic adverts sound like it deserves a Nobel.

I'm not quite sure where to start on this one. The plot is confusing, if not plain daft, and the whole concept of the film just doesn't work on any levels. Some of the effects were quite clever but overall it looks cheaply produced and filmed.

The acting was indifferent and you never really develop any love for the characters. Natalie Portman couldn't save this and won't have done herself any favours taking the role.

I loved it - a real brain-scratcher - Annihilation review by MB

I want to add some balance to these reviews because Ioved it. Admittedly, it may have helped that I had already read - and loved - the book it is based on, so I had already absorbed (and enjoyed) the various concepts this movie plays with.

Without giving any spoilers, the premise is that something from outer space has crashed into the earth and turned an area of swamp land into an unearthly/alien ecosystem - with new life forms, etc, etc. Then a bunch of scientists/soldiers go in to investigate.

What is life? This movie raises the biggest philosophical and existential questions. In the spirit of the best sci-fi, the movie is really inviting us to question into our own lives *today*. For my money, Annihilation challenges our basic, unconscious, assumptions about life and nature.

What is your view of "nature": is it inherently benevolent or evil or neither? What if our beliefs about nature are actually a projection of our own inner world: our hopes and fears. What if nature "just is" and we project onto it our personal struggles to understand ourselves. In other words, when we talk about and think about nature and our environment, we're really asking "Who and what am I?"

My point is - aside from thrills and spills, intriguing plot and sometimes beautiful visuals and sounds - what you've got here is a real brain-scratcher.

This is more than futuristic fun, this is delicious - and challenging - food for thought. I found it inspiring.

I should have read reviews before seeing this, but was taken in by a some 5 star reviews showing on the front of the dvd from respected sources. I don't know what film they were watching, but it wasn't this one. Absolutely terrible, some of the special effects were ok and I think that's it. Little twist at the end, but by that point I'd lost interest. I think you can watch this film in about 25 minutes without losing anything from the ponderous plot. And Natalie Portman can be great, then again she was in the star wars prequels and appears to have used that acting style in this film. Just really disappointed. I don't get many free nights to watch films and was looking forward to this and was let down. This will be going straight to a charity shop. I'd say if you see it there for £1.00 buy it, otherwise don't bother.

Absorbing movie. A mystery story really, with an imaginative backdrop scenario. I wish more Sci-Fi were like this; I don't need outer space cowboys as in Star Bores or magic super heroes, but some thing actually to do with science. A movie story like this has credibility to my mind. Enjoyed it. Into ray gun fights and spaceships whizzing around? This isn't for you. It is intelligent.

Fine performance by Portman too.

really really poor,Its a shame cause Portman and Garland have a huge talent

tries desperately to come as across as something deep and meaningful in the hope that the viewer doesnt notice how hollow it actually is.I also have the feeling Portman was phoning it in,lookin at that big easy Netflix check

The fact The Guardian newspaper had a review which asked"was the film to brainy for the box office",should send alarm bell ringing for anyone

as they ignored the inconvenient films like,errrr,Interstellar and Inception.

Much ado about nothing - Annihilation review by TM

Empty rubbish really cloaked in something trying to be like Arrival but failing miserably!  Some CEO scratching his head on how to cash in on the sci fi revival

Oh, so slow and nothing much happens until the end, but by then you've guessed what it will be. Don't bother.

Annihilation, in its own right, is a near-masterpiece. Near because most of its peculiar ideas (both visual and thematic-wise) are either borrowed from other films or books, or packed in such a way that pays an homage to the works that it also borrows from. It’s a strange relationship between the old and the new, where the old both inspires and breaks through the new via visual mastery that is ambiguous in the least – and straight up confusing at the most. So, what are these works that Annihilation borrows from? Well, two words (okay, maybe three): Tarkovsky, Kubrick, and Stanislaw Lem. Okay, four words, but three persons.

Right from the get-go, Annihilation starts off slowly and omits any relevant information that might put some perspective in the viewer’s mind. Despite of some mistaking this as a slow-burning intro, it is actually a good storytelling and kudos to the filmmakers for understanding just that. See, when you start with a 100% reliable narrator (whoever that might be) – then all sense of mystery is lost and you’re actually “hearing” the film instead of “watching” the film. There are exceptions to this rule, seen in films such as ‘The Lord of the Rings’ trilogy (Cate Blanchet) or another fairly underrated and unjustly-bashed smaller live feature called ‘Dylan Dog’ (Brandon Routh). The narration in these films is impeccably done and should be a book example on future filmmakers on how to do narration properly. But anyways, I digress: Annihilation features none of it, and is all the better for it.

In the film, Lena (Natalie Portman) wakes up in some facility with a hard case of partial amnesia and tries to make sense to whatever had happened to her right before the wake. Meanwhile, there are scientists and people in biohazard suits questioning Lena about her previous whereabouts, the fate of her team members, and other things that seem as distant and alien to Lena as she herself seems to them.

All of that is set in the film’s present day, and when Annihilation finally goes back to unravel the mystery to whatever happened before, it becomes abundantly clear that the majority of the chronology would depict events in retrospective in light of the main event. What is this main event you may ask? Well, I don’t know for certain: all I know was that it involves some kind of Aether aliens, DNA, and the Earth’s atmosphere. Doesn’t that sound suspiciously familiar? Well, the answer is, again, yes. That’s exactly how ‘Solaris’, written by Stanislaw Lem and later adapted by Andrey Tarkovsky, also tells its fairly poignant and dramatic sci-fi tale.

In fact, it would be only fair to say that Annihilation is a beautiful amalgamation between ‘Solaris’ and ‘Stalker’; ‘Solaris’ in its thematic subject, and ‘Stalker’ in its visual splendor. And why Kubrick? Mostly because of the film’s excellent sets and visually masterful camera work, which I would not dare to spoil further.

Bottom line: Annihilation is a must-see and that’s non-debatable (preferably on your own in a dark room, headphones, and a love lamp to keep you company).