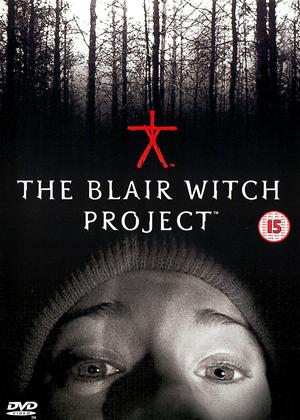 Reviews (3) of The Blair Witch Project

I watched this on a packed commuter train on the way home, maybe this the reason I did not find the film spooky in the slightest. I found it a struggled to keep my eyes from wandering out the window which I have never suffered from before and wondering why practically every other word needed to begin with F. It was a very cheap film to make which reflects in the end result.

Maybe its just my fault for not watching at home on my own with the lights off.

I rate this film very highly having watched it about three times over the last 15 years. The gradual disintegration of the group of 3 is really powerful and the performances by the actors are brilliant. A growing sense of menace is built up throughout the film, without any cheap gore or effects - thoroughly recommend for the discerning horror buff

This is an odd movie. Made on a budget, it looks like a short film (it is 80 minutes long) that would have been made by students, as part of a project at Arts School. Indeed, it is supposed to be a piece of non-fiction, in the reportage mode, made by a group of 3 American students who set out to explore a wood, in Maryland, that would be inhabited by one or more 'witches' and is the subject of a disputed, local legend. Once in the wood, the 3 students are quite ill-prepared for the chain of events awaiting them.

On one level, the film is compelling, despite the fact the plot could not be simpler. The suspense builds up and I was never bored while watching the film, as it manages to sustain tension. The internal dynamic of the group of students can also seem interesting.

On the other hand, the film feels like a 'draft' (and deliberately so, arguably). The wood itself never feels threatening to me and looks small (whether it is or not) and plain: there is nothing truly special about it. But that is most probably what has attracted viewers and fans over the years: everything in the film seems so prosaic (3 students who could be anyone, in a wood that could be any wood, and weird things start happening...) that it is easy for the viewer to identify with the characters.

The film has attained cult status, and this is most probably not warranted: it has been hyped up over the years... A masterpiece of the genre is 'Deliverance': this is to 'Deliverance' what a campervan is to a Lamborghini...

You will enjoy the movie if you like this kind of film, and it would perhaps deserve 3 * for its originality, not 2; but, if this is not quite your cup of tea, there are plenty of other films that are more interesting that one can watch...