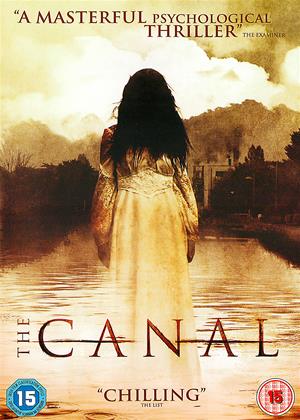 Synopsis:
Filin archivist David (Rupert Evans) has been having a rough time lately, as he suspects that his wife Alice (Hannah Hockstra) has been cheating on him with Alex (Carl Shaaban), one of her work clients. This stress is compounded when David's work partner Claire (Antonia Campbell-Hughes) gives him a reel of to-be-archived footage which shows that his house was the setting for a brutal murder in 1902. Becoming progressively more unsettled and unhinged, David begins to believe that a spectral presence is in his house and ends up following his wife to a nearby canal, where he discovers that she is indeed having an affair with Alex.
When Alice goes missing shortly afterwards, David contacts the police only to become the prime suspect in her disappearance. As the police grow more convinced that David has murdered his wife, he struggles to find proof of his growing suspicion that something otherworldly was instead responsible.
Actors:
Rupert Evans, Antonia Campbell-Hughes, Hannah Hoekstra, Kelly Byrne, Steve Oram, Calum Heath, Anneke Blok, Paddy Curran, Carl Shaaban, Alicja Ayres, Nick Devlin, Serena Brabazon, Myles Horgan, Conor Horgan, Natalie Radmall-Quirke, Rosaleen Byrne, Anthony Murphy, John Haugh, Maura Foley, Sinead Watters
Directors:
Ivan Kavanagh
Producers:
AnneMarie Naughton
Writers:
Ivan Kavanagh
Studio:
Kaleidoscope Home Ent.
Genres:
Horror, Thrillers
Countries:
Ireland, Horror, Thrillers

Reviews (1) of The Canal

Spoilers ... - The Canal review by NP

This is a tremendous low-budget shocker from Ireland and it stars one of the most convincing casts I’ve seen in a long, long time. From dinosaur-obsessed little scamp Billy (Calum Heath – one of the most appealing child actors you will see) to a truly incredible performance from Rupert Evans as David, everyone plays their parts to perfection, and I don’t use the word lightly.

If I’m brutally honest, ‘The Canal’ could have done with being perhaps ten minutes shorter. The ordeals faced by David are plentiful, but sometimes – as is often the case in these films – the continual reversion to ‘normality’ after a particularly frightening incident occurs once or twice too often. Other than that, the writing, direction and acting truly place the audience in the position of not knowing whether David is being shadowed by a ghostly child-murderer or he is the killer himself. Even as the end credits roll, we’re still not entirely sure.

This is a close-knit, intimate horror that unfurls at its own pace, slowly revealing – or appearing to reveal – clues as to the truth of events. We are in skilful hands here. Writer/director Ivan Kavanagh ensures that any confusion we experience is entirely deliberate, and when the scares become graphic, we really feel for the characters affected by them.

If there is any justice, Ivan Kavanagh has a fine future.

The indie horror scene has been exploding lately with creative and crafty filmmakers that really know how to create true terror that cuts deep. I’m relieved that today’s horror talent is finally starting to make more personal and psychological pictures on the terrorized family. A family should not just be mere bowling pins that a director can use for his bucket of horror tricks. It’s no fun watching a pin get knocked down. But when a concerned father becomes grief stricken at losing his cheating wife and raising his child, there’s a reason to care for the people on screen when ghosts and murder is involved.

Director Ivan Kavanagh wraps us in from the beginning with interesting characters to follow. David (Rupert Evans) is a film archivist who tries to engage a field trip of students by relating his work to watching ghosts. Little does he know that he’ll soon be eating those words when he runs across some old footage of a murder in his very house from a century ago. But before we get to all the scares of spooks that can only be spotted through film, let’s establish the psychological angle. David, a dedicated father to his child and loyal to his wife, suspects that the woman he loves has been cheating on him. His suspicions are correct as he follows her to a construction site where she is being ravished by another man. He picks up a hammer in anger, but leaves in disgust before they see him. Vomiting at a dirty public toilet, a sinister voice whispers to David from the dim darkness. The last thing he spots before blacking out is his wife being attacked by another man.

He comes to the next morning to discover his wife is missing and soon discovered dead in a canal. Now, of course, a mystery follows from such an earthshaking event, but it’s treated with real emotion as opposed to just being a plot stepping stone. We see David’s look of shock and enraged disbelief when the body is discovered, the soundtrack silenced of all voice and ambiance. A funeral follows where the related family is deeply depressed by the passing of such a woman, but hold a silent distance towards David.

Suspected by the cops for her death that was ruled as an accident, David becomes obsessed with tracking down the true killer. His path leads him towards archival footage where the ghosts that dwell within his home begin haunting David relentlessly. He starts hearing strange sounds behind the walls and digs through the drywall and brick hoping to prove he’s not crazy. Of course, nobody well can hear what he hears, but a select few can see the shadowy figures he captures only on camera.

This seems like familiar territory, but Kavanagh spins this twisted web better than anyone else. Psychological terror is much more effective than the usual batch of haunted house scares. Both of which play out beautifully as David descends into madness trying to protect his name and his cute son. As he slowly starts going down the hole too deep, he makes some futile attempts of intelligently removing others from the equation. He sends away his son with the nanny to a hotel, but when he checks in on them from a webcam he notices the ghosts have followed his little boy. Everyone is now scared around David including himself for when he finally makes the shocking discovery about the true killer. It’s probably not going to be a surprise for anyone who can piece these films together, but it’s still so masterfully assembled and shockingly revealed that you lose yourself in its artistry.

The Canal is first-rate horror with a chilling plot, eye-catching cinematography and scares that really get under your skin. It’s slow when it wants to be moody and intense when it wants to shock. It’s often hard to watch at times, but I absolutely love that feeling when a horror film gives me true goosebumps rather than manufactured jumps. Director Ivan Kavanagh blends a few different styles of horror together that turn out much better than one might expect. The end result is a movie that leaves the viewer gripping the edge of their seat right up to the final shot with genuine surprise and dread.