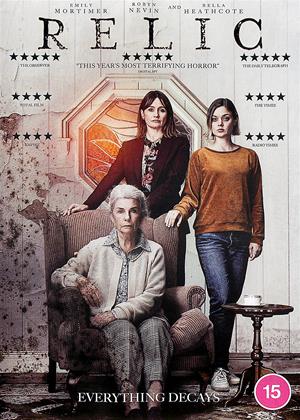 Probably not the thing to watch late at night if you live in a dark, creaky old house with your elderly mother, but this highly original piece by Japanese Australian first-timer Natalie Erika James is for the most part a compelling psychological horror. There's terrifying dreams, deeply buried memories of traumas past, plaster infested with creeping black mould and a scrabbling noise in the brickwork, nasty-looking bruises across breastbones and strips of skin that shear away from flesh. But in many ways the movie’s simplest conceit is its most chilling and gives rise to its most impressively scarifying filmmaking: a house as metaphor for the mind of its inhabitant. So when that inhabitant is slowly losing herself to dementia, the house begins to collapse in on itself, a labyrinth of dead ends, foreshortened impossible geometries and doorways that turn into solid walls behind your back. If growing up is often portrayed as realising you can never go home again, here growing old is realising that even as home betrays you, you can never get away from it.

The house's longtime resident is Edna (Robyn Nevin), whose long white hair is a handy indicator of how together she is — neatly pinned back when she’s her spiky self, loose and straggly when she’s become disoriented. It's full of post-it notes bearing reminders that range from the banal, like “take pills,” to the cryptic — like “don’t follow it.” For a time she seems fine, merely irritated to be treated like an invalid, but soon starts to deteriorate, and daughter Kay is faced with tough decisions about her mother’s future while also being troubled by nightmares and noises that send her creeping through darkened hallways at night — a motif that admittedly becomes increasingly unsubtle and rather overused. DP Charlie Sarroff’s photography is terrific though, with patient, observant frames accumulating mood steadily; things that are cheerful become ominous, like the pulsing of Christmas tree lights, and images such as Edna working at her candle art, become inexplicably sinister.

There are times when you can't help thinking that a lot of the women’s anxiety could be dissipated with a couple of 100-watt lightbulbs, and occasionally James overplays her horror-movie hand and we notice the contrivances. But generally, though, the excesses are forgiven due to the cleanly drawn psychologies of the three actors, whose excellent performances neatly draw the intergenerational relationships between grandmother, mother and daughter with great subtlety and insight; we observe the sad truism of how a daughter can deeply love her mother while also despising or fearing the ageing version of her own self that Mum represents. More to come, hopefully, from a talented director.

Yet another 'horror' film that depends almost entirely on darkness as a substitute for more subtle visual and sonic effects. It is often quite a challenge to work out what is going on.

The subject is dementia and the creepy house is used as a clunky metaphor for the unravelling mind of the oldest of the three female leads. However, any serious examination of dementia is scrapped in favour of cheap scare tactics and lingering shots of impenetrable shadows.

There is clearly meant to be some commentary about the mystic bond between grandmother, daughter and granddaughter, but this becomes grimly laughable when the two younger women are forced to beat the living daylights out of the grandmother, before pulling all her hair out and cradling her in a sinister embrace.

There is nothing original here and the only unsettling aspect is the inflated seriousness of the interviews in the disc extras.

Outstanding in its class - Relic review by SG

This is an outstandingly tedious film. There are some films that are so bad that we should demand payment to watch them. This is a prime example of that genre. A pointless and derivative waste of time of a film. The lead actor spends their time shouting 'mum'. That's it. Don't waste your time. Trust me: it's nonsense.

I suppose it was o.k & it just about retained my interest but i wouldn't watch it again or recommend it to anyone .It's quite well done for what it is & it's not too long which was good as about halfway through i was wondering when it was going to end .

I found this film quite ridiculois. If I had known it was going to be supernatural I wouldn't have watched it.

Slow, moody and open to interpretation. - Relic review by NP

‘The Relic’ is a mostly excellent horror film that unravels slightly toward the end. Telling the story of Edna (Robyn Nevin), who appears to be succumbing to dementia, and her family’s struggle to help her, this could be a parable for widespread age and decay, and what ultimately becomes of us. It’s quite humbling.

It is slow, moody, beautifully acted and written, troubling and melancholic: it reminds us we are all finite. Decay becomes the shadow cast before the characters and they are simply succumbing to it. Although, it the best traditions of horror, this is open to interpretation.

The allegory becomes a little too much toward the story’s close however, and the imagery swaps subtlety for something less sophisticated. This doesn’t exactly break the spell, and the evolution into full horror is effective, but it threatens to drift into fantasy. My score is 7 out of 10.

A surprisingly interesting psychological horror film that is full of suspense and creepiness and has an underlying theme that is really clever. When her 80 year old and dementia suffering mother Edna (Robyn Nevin) goes missing Kay (Emily Mortimer) and her daughter Sam (Bella Heathcote) head to her isolated house to try and find her with Kay feeling especially guilty for not having been more attentive. The house reveals many signs of her increasing dementia and her disappearance is a real mystery until one morning she just as mysteriously turns up. As the three women explore the complexities of their relationship with each other the house begins to reveal strange phenomena which soon become very worrying indeed. The horror aspects of this narrative explores the labyrinth of Edna's mind trapped within dementia and occasionally finding some light of normality. With a very creepy house and some extremely effective sound effects the build up of tension and fear is impactive. The essence of the story being that Edna's failing mind is manifested in changes to the environment around her. This makes for quite an unsettling horror film that I recommend.