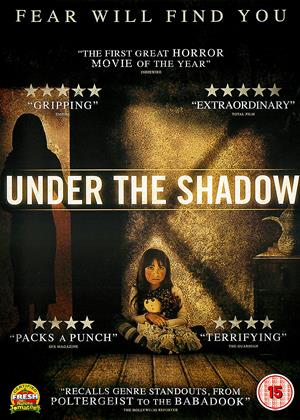 Reviews (4) of Under the Shadow

This is a film that definitely deserves more than one viewing. Shideh (Narges Rashidi), husband Iraj (Bobby Naderi) and daughter Dorsa (Avin Manshadi) live amid the chaos of the Iran-Iraq war. Shideh’s studies and livelihood are in ruins, patient and tolerant Iraj has been posted away and Dorsa is behaving very oddly. My only problem with this story, as in a lot of similar situations, is that Shideh resolutely refuses to move from the family home, despite her less Westernised neighbours fleeing and advising her to do the same, and every waking hour living in fear of the latest shelling.

‘Under the Shadow’ reminds me of Japanese horror, particularly ‘Dark Water (2002)’, with an errant child, and an aberration on the ceiling that may or may not be malevolent. It has been compared to ‘The Babadook (2014)’ (which I found wholly inferior to this). That said, this is hugely original in its presentation of a mysterious, ghostly horror. First whispered about by other children in the apartments, and then corroborated by the other fleeing parents, the audience is left impatiently awaiting their own first glimpse of the ‘djinn’.

With this level of relentless man-made and demonic aggravation, it’s a big relief when Shideh decides to leave after all, but events suggest she may not be entirely free of the shadow.

A lot of this film’s success rests with young Manshadi as the little girl who is required to display increasingly erratic behaviour. Any awfulness Dorsa might exude is saved by Manshadi’s mainly cherubic performance. Hardly ever does she merely sink into petulance or ‘brattism’ as a lesser performer would. Our sympathies are mostly with her, but also with her stubborn mother, who behaves in a way that doesn’t always invite our consideration, but again is brilliantly played. Babak Anvari’s gloomy, measured writing and his solid, sometimes spectacular direction ensure the mood is sustained wonderfully throughout. A terrific co-production between Qatar, Jordan, and the United Kingdom, this is strongly recommended.

A very unusual Iranian Horror Movie ,very much in a similar vein to The Babbadook.

During the War in the Middle East of 1988 a family are separated ,Friends and Neighbors leave the building for safety in other parts of the country ,Missile Bombing is destroying the neighborhood and a dark presence begins to take over the ever more empty Block of apartments . Creepy and Unsettling , Subtitled but well worth the inconvenience if that worries you .

I've never seen anything as bad as this.

The films starts well but ends in incomprehensible way.

It's a total waste of time.

Movie with a difference. - Under the Shadow review by BE

A chillingly realistic 'horror' movie without the blood and gore. Extremely well presented with excellent acting from the two female leads (mother and daughter). I wasn't sure what to expect as the storyline started off quietly and then the tension gradually built up. Very well worth a watch.

Under the Shadow review by Adrijan Arsovski - Cinema Paradiso

Iranian-British horror Under the Shadow continues in the footsteps of Australian terror The Babadook and Korean scare-fest The Wailing insofar it rides the newly formed wave of non-American horror flicks that beat their American counterparts by manifold amounts. Why are these films scarier than your typical USA Paranormal Activity borefest? (excluding part uno) Well, maybe because each country and culture differently perceives what is scary and how scariness affects the human psyche.

Or maybe they just produce better films, who knows.

Under the Shadow is directed by Babak Anvari and stars Persian actors Narges Rashidi, Bobby Naderi, Arash Marandi, Avin Manshadi and others. The film is (probably) inspired by recent success A Girl Walks Home Alone at Night, which was in turn a neo-noir horror/thriller depicting vampires as American and British audiences haven’t seen before. Under the Shadow borrows elements from aforementioned feature, as well as the Babadook insofar intertwining of the surreal and the real, and produces a slice of cinema that would probably make you wake up in the middle of the night looking for mum.

Of course, the bachelor/ette you are, you go back to sleep knowing to avoid similar predicaments in the near future, and opt for rom-coms of the lowest common denominator. Back to the film.

Under the Shadow is set in 1980’s Teheran and tells the story of a former student named Shideh (Narges Rashidi) who gets rejected a second time from a nearby medical school. Upset and demoralized, Shideh returns home to her husband Iraj (Bobby Naderi) – only to find him recruited by the Iranian army to fight against the forces of Iraq during the Iran-Iraq conflict. Meanwhile, Shideh’s daughter is suffering from constant fever that eerily enough – doesn’t seem like its origin is tied to anything of this World, at least for the time being. And, to add insult to injury – her daughter Dorsa also has nightmares about certain Djinns who supposedly plague the house the residents find themselves in.

In regards to atmosphere - Under the Shadow takes my sympathy no questions asked. As the film progresses, it soon becomes clear the horror is not only supernatural, but very real and very palpable – one can almost feel how the atrocities of war slowly start creeping out from under our protagonists skin and onto the screen. Everything they do, from mere daily habits to questioning the very core of their existence, is slowly engulfing both their minds and their souls. War is a nightmare one cannot just wake up from and forget about its consequences altogether.

Under the Shadow is a fresh take on horror coming from a country that battles its own “demons” during the past several decades. It’s maybe not as novel as one thinks that it is in the first place, but at least it carries some weight for one to ponder long after the credits start rolling.