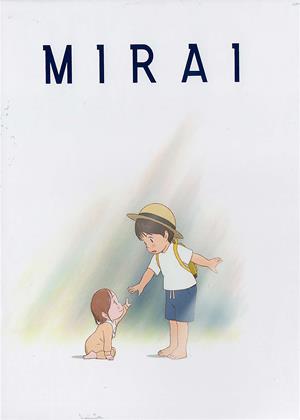 Director Mamoru Hosoda has quickly been rising over the decade as one of the most acclaimed anime directors. His work on such films as Wolf Children bled the fantastical with slice-of-life drama. Mirai appears to be of similar construction in a childhood drama that plays fast and loose with time and imagination. But what’s most surprising is that the film not only scales down the age of the protagonist but also the surreal edge to the picture with a message so blatant about generational understanding it meanders far too much.

The film is at least easy enough to digest for a younger crowd as a sort of free-flowing and simple Back to the Future style emotional ride. This is mostly due to the center of the story being the young boy Kun. He lives with his working mom and stay-at-home father, with a new baby sister now in the picture. Kun acts pretty much how you’d expect a little boy to act around the house. He makes messes with his toys, is desperate for attention, and throws tantrums. Kun’s mother becomes easily bitter towards Kun and his father tries desperately to keep everything running smoothly within the house.

It’s a classic case of a big brother feeling left out in the cold for his baby sister, Mirai. But something magical happens when he ventures into their yard. His minds drift into an imaginary world. On his first visit, he meets a human version of the family dog, naturally acting neurotic and pompous like a frantic prince who has lost his crown. The two vents and play catch. Later, Kun will be visited by a high school girl who he soon discovers is Mirai from the future. They talk about trying to be a better person, except the conversations become surreal when future Mirai and a human dog bicker about the legitimacy of their presence, as though they’re making a case for their psychological importance.

What it all essentially boils down to is that Kun can take trips throughout the past of his family lineage and see things from different generational perspectives. He’ll go back in time to visit the kid version of his mother, more of a messy and troublesome kid than her more strict adult self. He’ll also be visited by his motorcycle-mechanic grandfather who helps him gain some inspiration to finally ride his bike. There are cute little adventures in between, as when Kun, Mirai, and the dog attempt to put away a traditional Japanese doll set as its superstitious context will prevent Mirai from being married in the future.

One area where Hosoda hasn’t faltered as a director is his details in the slice-of-life aspects. The dialogue and situations of a busy family feel real and relatable. So vivid are these scenes that the more fantastical elements come off a little too basic in their favoring of the absurd and surreal. The more memorable scenes are that of Mirai’s mother discussing parenthood with grandma and how she is fearful and proud of the future she is laying out. It’s a more engrossing moment than the more imaginary sequence of Kun wandering around a fantastical train station when deciding to run away from home.

Mirai does have its moment of brilliance but when paired with the more intrusive imaginary elements, it loses some of its delightful allure. To call this Hosoda’s lesser film isn’t the most condemning of his resume as it still has some fun and emotion to its tale of family life. But in a decade of so much compelling anime drama existing within a real Japan, Mirai doesn’t blend as perfectly.