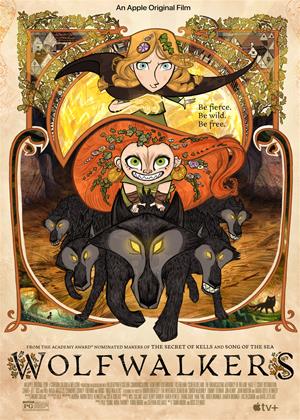 Synopsis:
A young apprentice hunter journeys to Ireland with her father to help wipe out the last wolf pack. But everything changes when she befriends a free-spirited girl from a mysterious tribe rumored to transform into wolves by night.
Actors:
Sean Bean, Honor Kneafsey
Genres:
Anime & Animation, Children & Family

Wolfwalkers marks the third film by Irish animation studio Cartoon Saloon in their animated tales of Irish folklore. Their previous pictures were the quietly colorful The Secret of Kells and somberly whimsical The Song of the Sea. These were films with great ambition and a style all their own but they never fully won me over with their meandering stories. Thankfully, Wolfwalkers is one of the best works, becoming a grounded yet poignant story with animation that feels rough and alive.

Taking place in 17th-century Ireland, a kingdom finds itself under attack by wolves roaming about the woods. Existing among them are the Wolfwalkers, humans that can transform into wolves when they find themselves asleep. Leading them is Mebh, a wild child of the woods who tries to protect her pact while her human mother lies sleeping in her wolf-walker trance state. Existing within the kingdom is the ambitious kid Robyn, committed to proving herself as a hunter of wolves. She’s prepared herself to venture off on her own, despite the wishes of her overly protective single father who acts as the town’s local hunter. What she’s not prepared for is discovering someone like Mebh with her wild ways of feral living.

The story of acceptance becomes apparent quite quickly but there’s an immense level of character building throughout to never make the tale too simple. Robyn’s father is naturally protective and doesn’t take his daughter seriously when she starts telling stories of the Wolfwalkers but he also shows a deep concern for her protection that is more tragic than frustrated. The evil tyrant who runs the town through his own religious-based philosophy of order is built to be evil about one so deeply entrenched in his own spirituality that his bloodlust doesn’t seem random. Even Mebh’s mother, who would seem to have a natural disgust of humans for living among wolves, seems to have a protectively maternal nature that desires more peace than war, preventing the film from fully divulging into a war of humans and wolves. That being said, the climax is exceptionally thrilling as wolves try to hold off advancing soldiers for the purpose of saving a life.

The animation takes a stark turn in this film when compared to other Cartoon Saloon productions. The 2D animation still has that angular storybook quality, even dissecting the screen to create the illusion of a Jan Brett book. But there’s a rougher edge this time around, where the characters seem to still have pencil test marks in the curved bodies. While not looking as polished as other pictures, it adds to the charm. The animation present is meant to appear more lived-in and dirty, as with Mebh with her leaf-peppered hair and dirty nose. Noticing the line art within the animation serves as a reminder that there’s some extra work behind this film than merely relying on the smoother edge of computer animation. It is a style that feels all its own yet breathing with life with familiar drawing techniques present throughout.

The world-building is astounding, never easily setting on the divide between humans and wolves, making the vendetta feel one that has remained for a long time. The little details of the wolf posters and the crafted nest of the pack prevent the story from becoming too lost in its own assumed whimsy of folk tales. The character chemistry between Robyn and Mebh feels real and heartbreaking, where they’re both such ambitious girls who feel shunned by worlds that don’t care for their ideals. When we fear one may be dead or doomed to a life of turmoil, it’s genuinely heartbreaking.

Wolfwalkers is one of those rare breeds of animation that carries that same level Disney fairytale yet doesn’t resolve for endings too sentimental or animation most clean. It’s exciting and magical enough for kids yet wondrous and poignant enough for adults to adore. There should be more animated films such as this, brimming with powerful storytelling and inspiring design.