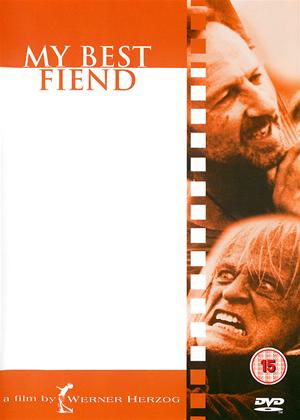 Synopsis:
A chain of coincidences brings the 13-year-old schoolboy Werner Herzog together with Klaus Kinski to the same apartment in Munich. In an unabated, 48 hour fit of rage, Kinski immediately proceeds to lay waste to all the furniture, only one of such fits to come. Herzog therefore knows what awaits him when, some years later, he engages Kinski to work with him on Aguirre, The Wrath Of God, their first film together. Four more films would follow. My Best Fiend is a film about the love-hate relationship between director Werner Herzog and Klaus Kinski - utterly puzzling to others.
It reveals the deep trust between two exceptional artists and their independently and simultaneously hatched plans to murder one another.
Actors:
Klaus Kinski, Claudia Cardinale, Justo González, Mick Jagger, Eva Mattes, Thomas Mauch, Benino Moreno Placido, Beat Presser, Jason Robards, Guillermo Ríos, Walter Saxer, Baron van der Recke, Baronin van der Recke, Andrés Vicente
Directors:
Werner Herzog
Narrated By:
Werner Herzog
Aka:
Mein liebster Feind - Klaus Kinski
Studio:
Anchor Bay
Genres:
Documentary
Countries:
Germany, Documentary

Reviews (2) of My Best Fiend

Stranger than fiction - My Best Fiend review by dw

If you are a fan of Werner Herzog and the wild-child Klaus Kinsky this documentary tells a unique story of two geniuses. It was good top understand their rexplosive relationship. I realy enjoyed it.

This is a documentary written and directed by the acclaimed Werner Herzog, and focusses on his tumultuous relationship with volatile actor Klaus Kinski. Volatile might actually be an understatement for, as the very opening shots reveal, Kinski was a man of unpredictable temper. And when he let go of that temper, well …

It is impossible to review this without at least touching on some of Kinski’s personal peccadillos. In the 1950s, he was diagnosed with psychopathy and was unable to secure film roles. As a result, he twice attempted suicide. His career recovered somewhat, but his schizophrenic behaviour didn’t. After his death, there were various allegations from family members of sexual abuse.

Herzog, despite being labelled a megalomaniac (and other things) by Kinski, has lead a less notorious lifestyle. He has married three times, and has continued to direct to this day.

Featuring much behind-the-scenes footage of Kinski’s rages, Herzog’s personal anecdotes also feature a more measured human being, even suggesting someone who would instigate his tantrums as means of making sure everyone’s attention was focussed on him. Herzog would even provoke his star before a take, ensuring he had got it out of his system in time for filming! Steering Kinski’s volatility could never always be successful, of course, and it is with a vein of black humour that Herzog recounts tales of actually intending to kill his ‘best fiend’.

Two fascinating characters, then, who were often capable of greatness as a result of their explosive relationship. It would, of course, have been fascinating to have had Kinski alive at this time to provide his own reminiscences. But we are left with remembrances from those he worked with, my two favourites featuring one time when his co-star Eva Mattes won an acting award, and Kinski did not. I don’t need such accolades, he is said to have replied: I know I am a genius! Secondly, the two men were at such loggerheads that Herzog threatened to empty eight bullets into Kinski’s head, leaving the ninth for himself!