Rent The Ghost of Frankenstein (1942) 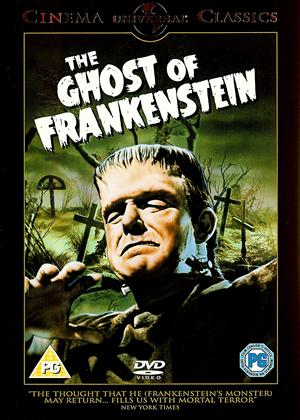 Reviews (1) of The Ghost of Frankenstein

Spoilers ... - The Ghost of Frankenstein review by NP

Cedric Hardwicke is Doctor Ludwig Frankenstein, son of Colin Clive and brother of Basil Rathbone, and by the far the most retrained family member, possessing none of his relatives’ intensity. Bela Lugosi returns as Ygor, happily unaffected by being ‘riddled with bullets’ in the previous film. His balance of mischief and malice is finely crafted and Ygor remains the picture’s most animated character. Ralph Bellamy’s rather dully efficient hero Eric, and his glamorous partner Elsa (Evelyn Ankers) are the alleged goodies, as always less interesting than the villains, a clan aided by Doctor Bohmer played by the mighty Lionel Atwill.

The Monster’s first appearance, clumsily stumbling out from the now hard-set sulphur pit that incarcerated and preserved him, is effective. One's hope is that the monster’s robotic groping is a result of his ordeal, but that is pretty much the sum total of Lon Chaney’s (the ‘Jr’ is now gone from his name in the credits) interpretation of the role. Having said that, the following scene, with Ygor chasing after him across the blasted health-land as The Monster tries to find the best spot to attract the lightening has a charming surreality about it; like a panicking father trying to gain some control over an errant child.

And yet the people the mis-matched duo meet in Vasaria as they search for the latest Baron Frankenstein, are disappointingly unafraid of them. More a curiosity befalls the young maiden and gaggle of townsfolk as they set eyes on the unsightly couple, and this, alongside Chaney’s soulless performance, undermines The Monster’s effectiveness greatly.

Once in Vasaria, the Monster is captured and imprisoned. As Ludwig is brought forward and pretends not to recognise the creature, we catch a glimmer of emotion on his/its face as anger takes hold (to balance with this, there is a scene where Ygor, gesturing towards the Monster, exclaims ‘Can’t you see? He is for the first time happy in his life’. Chaney’s unmoving, unblinking, totally statue-lie performance gives no indication of any emotion whatsoever, and either renders the scene ludicrous, or displays Ygor’s humour extends to heavy sarcasm).

To remind viewers of the original story, we are treated to a flashback from the original film, also reminding us how much more moodily lit, extensively furnished and interestingly directed the 1931 picture was by comparison, although it substitutes a close-up of Chaney’s monster in place of the original Karloff. Director Erle C Kenton makes great use of shadows when dealing with the Monster – sadly, the shadow close-ups bear little resemblance to the Monsters actual actions or placing within the composition.

The ghost to justify the title is that of the original Baron (this time with Hardwicke playing Colin Clive’s role) visiting his son and introducing the idea of placing a different brain into his creation.

It is just possible that Chaney’s subdued take was deliberate to highlight how startlingly changed he is by the film’s finale. With Ygor’s brain in his head, he speaks with Ygor’s voice in an impressively dubbed scene. This new evilly grinning personality is how the Monster would remain (theoretically) throughout the next four Universal films since no further transplant takes place. Suddenly blinded by an averse blood-type reaction, the Monster causes the laboratory to explode, lending us some nice shots of his face blistering and frazzling in the flames, before some cheerful ‘wrapping-up’ music accompanies Eric and Elsa happily away to safety leaving the evil-doers to burn.