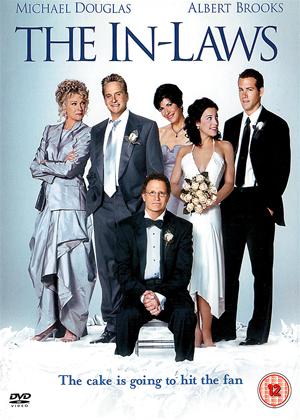 Rising star Ryan Reynolds gets vey little to do in this movie - it's largely Douglas and Brooks' show - and it's just fine for it. Douglas and Brooks create the odd-couple chemistry on which the comedy works. Douglas is a secret agent in the middle of a case, who never seems to have time to be a father to his son (Reynolds) despite the latter's upcoming nuptials. Brooks is a fussy, uptight podiatrist who likes everything to be done the right way, and finds Douglas' seemingly shoddy parenting offensive even before he gets accidentally dragged into a spy operation to stop a terrorist deal.

By and large the comedy lands well - Douglas has easy charisma and is well supported by a witty script that isn't afraid to feed Brooks a few key scenes that affect the action. We get chases, infiltration scenes, FBI harassment, wedding mis-haps and fish-out-of-water comedy as Brooks has to go undercover.

The film makes a few mis-steps; - David Suchet's volatile arms dealer is funny, but the film stretches an ongoing joke about his sexuality so far that it starts to become homophobic, and both bride and groom get very little to do besides look befuddled and gawp.

Luckily those mis-steps are few and forgivable - the rest of the film is a fun, silly experience that would happily enliven an evening.