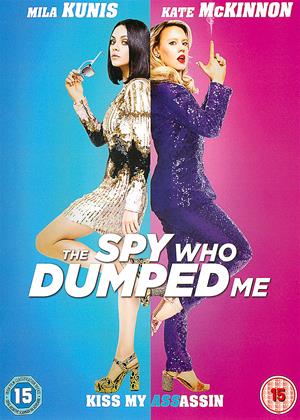 Rent other films like The Spy Who Dumped Me

Reviews (3) of The Spy Who Dumped Me

Mind Numbing - The Spy Who Dumped Me review by MG

This not the kind of movie I like to see. It is very light weight. The women heart even sexy. But, they think they are.

Not great - The Spy Who Dumped Me review by SB

Expected something lighthearted but this was very disappointing. Kept waiting for some action or for it to be funny but it just didn't happen

POOR - The Spy Who Dumped Me review by JulieBird

Not worth watching. I thought it was supposed to be an amusing adventure. Boring yes and not evern funny.

The Spy Who Dumped Me review by Mark McPherson - Cinema Paradiso

The comedy of errors structure in The Spy Who Dumped Me feels like an impromptu script challenge, where the mere catchy title was thrown out there and a time limit was set to see what director Susanna Fogel could come up with. Okay, easy enough; the girlfriend of a spy feels abandoned and dumped and is thrown into an international conspiracy that forces her on the run. Great, who do we get for it? Well, it should be female based, so let’s have a duo of Mila Kunis and Kate McKinnon. They could make for a funny duo. Now just mix in some actiony spy elements and some goofy banter with gross-out jokes and we have ourselves a comedy.

Indeed, the film has all the right stuff, but kinda flails to get its humor engines chugging. I think the problem is that Kunis and McKinnon are so good when left to their own devices that when they’re required to reinforce that spy element, they struggle to keep their comedic wit intact amid bullets, chases, and daring feats. This can best be seen during the opening and closing numbers which involve Kunis buried in an arcade game and McKinnon rocking the microphone. Very funny and natural stuff here. The scene where McKinnon has to go undercover as a trapeze artist isn’t as strong, despite something of a build up to that moment which requires a lot of physical expertise. To be fair, I wouldn’t be able to sling out many quips when suspended so far off the ground for a scene of both fights and feat.

The two of them thankfully have some muscle for the spy aspect that are better adept at being tossed into gunfights and chases. Sam Heughan plays an agent who comes to the rescue and does a lot of the running and gunning before Kunis receives the honor of delivering the final shot and one-liner. Justin Theroux makes for a believable enough guy to play both a flaky boyfriend and a rough spy. Gillian Anderson certainly fits the bill as the top brass of a spy agency. And Ivanna Sakhno makes for one heck of a creepy killer with her acrobatic theme. All of these players are going into the spy plot straight to give Kunis and McKinnon plenty of room to gobble the goofy lines and moments. The only one trying for a laugh as well is Hasan Minhaj as a bumbling agent who more or less can keep up with the female duo.

From scene to scene, most of the film works. There’s a spectacular shot where the camera follows Theroux taking a leap out of an apartment building, tumbling down a car, and landing on the street before taking off, all performed in one magnificent shot. There’s a lot of brilliant bits of humor when Kunis shoves the MacGuffin of a small computer drive up her vagina, at point asked by an agent if she can activate it internally, McKinnon providing the perfect backup of commentary.

I really don’t want to compare a film such as this to the likes of Paul Feig’s Spy but that film just did a great job weaving a female cast into a hilarious and engaging spy plot. The problem with The Spy Who Dumped Me feels more like Kunis and McKinnon just wandered into a spy plot, except they themselves become entrenched in the genre more through action movie osmosis than any believable development. The fact of the matter is that Kunis and McKinnon are so good they just about stumble into any genre and still come out fairly charming, even if they’re not all that suitable for a spy movie.