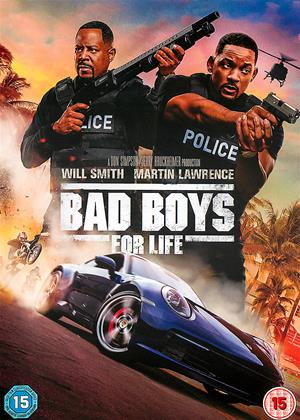 Reviews (5) of Bad Boys for Life

As a past fan of Will Smith and the Bad Boys films, I thought this would be a lot better than it actually is. Sadly Smith doesn't seem to have turned out a decent film for a long time and this is sadly another one of those, add to the bargain bin movies! As a person of mixed ethnic heritage, I constantly find it irritating and highly embarrassing when Black Actors feel it's ok for them to constantly use the N***a word, constantly swear un-necessarily and make racist comments towards others when it isn't, and there's a lot of this in this film! I also found the constant and excessively heavy religious references annoying too, half of this film felt like they were trying to push religion onto the viewer and it really does ruin the film as it's excessive! The ending was clearly set up for a follow on, as seems have to become the standard nowadays in these films. Rather than this concentrating on the partnership between Smith and Lawrence, just like 'The fast & Furious' franchise, this throws into the plot a whole crew of characters and at times it really did feel quite muddy and like a poor mans version of 'Fast & Furious'! Although there was plenty of action, because it had all been done before and there was nothing new, neither in the plot, direction, action, anywhere, I just found it boring and quite a drag to watch. It's ok, but nothing special, but there seems to be a move nowadays in films to push and promote certain agendas, such as the religious and race element shown here, which to my mind just completely ruins any film!

Very much a case of making money from a great 1st two films. Over stylised, lacked substance. A fat Martin Lawrence desperately trying to be funny with weak jokes, cringe worthy references to the original movies, a weak storyline and some bad fight scenes. Should have made much more use if the AMMO characters, could have built them in more, especially the female characters.

Also very frustrating why black people find it acceptable to say "nigga" yet call other races racist when they use the word. Make up your mind black community! Also several anti white jokes which again, apparently acceptable because black people are saying it (wouldn't get away with that if white characters did that...).

A very unsatisfying movie with racist undertones. Dont bother watching it, the originals are far better.

I loved watching every minute of the film. Brilliant but Will Smith is always great in all his films! Action and comedy all the time and a twist at the end. Highly recommend it.

Ill admit to not having seen the original bad boys yet (dont know why, just never got round to it)

But i was expecting good things given the 2 lead characters.

In that assumption i failed to consider the complete lack of film making talent in hollywood at the moment.

Right from the start this film sets the tone as utter trash. And it just doesnt recover.

I love Will Smith (not that way, although i could if i was) and ill say i dont think ive ever not enjoyed a film he has been in, even rubbish ones. This sadly bucks that trend. Its so bad even the super cool Will can do nothing to recover it - but worse still he seems to be enjoying himself being centre of attention in this rubbish.

As my girlfriend said, Life is short and we shouldnt be spending it watching rubbish like this.

I thought this film might be fun but in fact it was just a little bit racist meaning it was not fun at all. How can a film, in 2020, think it is OK to be racist as long as it is black people making nasty, stereo typical comments re "white people"? And not a small studio piece either, but Will Smith and Sony.

So no, I did not like this film at all and cannot recommend unless racism is something you enjoy.

Though the buddy cop duo of Mike and Marcus seem to be committed to being the bad boys of law enforcement for over 20 years, their third film seems to take things in a slightly more grounded light. Free from the chaotic direction of Michael Bay, they finally feel like more developed and lovable characters, able to better balance the banter with the charm. In doing so, however, this creates a sort of uncomfortable realization of why Bad Boys seems better suited for the lane of explosions most overblown than thriller elements not as fitting.

The film starts off well enough that it doesn’t look as though it’ll be a typical Bad Boys affair. Martin Lawrence returns to the role of Marcus, now a grandfather and very much looking forward to retirement. Will Smith returns as Mike who isn’t done with the force yet, especially since he has some unfinished businesses. A witch (yes, a witch) is sending a hitman after everyone who wronged her and Mike just happens to be on that list. He is initially gunned down but lives to get his revenge.

Here’s the most interesting aspect. While Mike is undergoing surgery, Marcus prays to his god to save Mike in exchange for not bringing any more violence to this world. That’s a bold promise that Marcus clearly can’t keep because let’s face it, this is Bad Boys we’re talking about. Merely punching out the bad guys and bringing them in for questioning isn’t going to cut it. By their very nature, Mike and Marcus can’t be non-violent. Even a quiet day at home leads to Marcus nearly taking his head off via an accident with a ceiling fan. The problem is the film tries to continue this philosophy with Marcus earnestly until about the second act where it becomes a punchline.

Now, this sort of reasoning is common for an action picture. Some side characters will preach nonviolence and they’ll be proven wrong somehow, either by a villain killing them or the brash hero berating them. Bad Boys For Life showcases this method of living through faith for the main character and only later writes it off as a joke. By that point in the film, everything has kicked into action thriller autopilot with guns blazing and fires raging. That’s all well and good but if all this was just going to lead up to Marcus gleefully shooting a helicopter pilot in the face, why even bother giving him this philosophical aspect that is treated as a mere phase? This seems almost more egregious than anything Michael Bay pulled off in his other films.

If you can distance yourself from that concept as much as the directors seem to do, there is some fun to be had in the picture. Smith and Lawrence have an undeniable chemistry that stands the test of time, becoming the most fully realized and emotional versions of these characters ever. I did enjoy how the story felt more personally motivating, taking a cue from the Fast & Furious playbook of family being the core. Even the action is very pleasing to the eye, featuring car chases and shootouts that are more expertly shot than manically driving. Compared to Michael Bay’s more bombastic approach, it feels weird to say that the sight of Smith fleeing a truck with only a few explosions seems quaint.

Bad Boys For Life is a bit of frustrating picture in that it can’t decide if it really wants to have a life-changing arc of the characters or just settle for typical buddy cop antics. The film meets somewhere in the middle and lets the strong performances carry through most of the film’s cynicism which somehow never feels overblown. The boys may have to sing their titular theme song at least three times during the course of this movie but I’d be lying if I said they couldn’t still carry that tune.